I was looking in my 2005 Tacoma Owner's Manual and there is no mention at all about changing the brake fluid. Wondering if other car makers call it out in their maintenance schedule? I know most motorcycle manuals call out a brake fluid change in the maintenance schedule to be performed every 2 or 3 years. So my 2005 Tacoma (only has 50K miles) still has the original brake fluid, and it still looks new (color wise) in the clear brake fluid reservoir. But I'm going to change it out anyway since it's really old. Probably should have did it years ago. Changing brake fluid is probably even more neglected by car owners than changing coolant.

Change it! I would change it every 2-3 years. 5 years max. Brake fluid is hydroscopic. Especially in humid/moist locations change more frequently. I use a Mity Vac vacuum extractor and suck it out at the brake caliper bleeders. 1 qt usually does a car, unless it is a Z06 or something with big calipers with two bleeders per caliper. Then get 2 quarts.
K

Is it always right to activate the ABS pump (and valves?) as part of a complete job ?
G

It seems all my used that were serviced at the dealerships before my ownership had their brake fluid changed on a regular basis. Funny you mentioned this as I just finished doing the last of mine 5 minutes ago. That bleeder system where you use your front tire pressure is "THE" bomb! So easy....
C

Queue the 'I've never changed it and my car is great' people. My opinion (What I do) Every time I change brake pads, or every 18-24 months. When I had my track car it was before and after every event as I swapped pads/rotors to dedicated pieces for the track event. I will also do it after a spirited drive if I notice I got the brakes particularly hot. Its not hard, and fluid is cheap so I see no reason not to.
S

On all my cars I bleed my brakes yearly. I do it during a warm, low humidity summer day. I never activate the ABS while bleeding, but over the course of the year I take advantage of appropriate opportunities to exercise the ABS (e.g. a smooth, out of the way, no traffic, wet road covered with autumn leaves). This moves fluid in and out of the ABS system. Unless you have a "professional" pressure bleeder, I don't suggest those. Pressure bleeders pump in ambient humidity and contaminate the new fluid (professional pressure bleeders have a diaphragm that separates the pressurized air from the fluid). I've never had success with vacuum bleeders. My wife pumps the pedal for me. I put a block of wood behind the pedal so the pedal does not travel beyond its normal range. I suck the old fluid out of the reservoir and fill with fresh fluid before starting the bleeding process. I use a full liter of fluid per car to insure a full flush. Scott
D

^ Sure but the never changed it and my car is great people are probably 95% of the population, just not as much on automotive forums which emphasize token gestures towards vehicle maintenance. If there is one thing this site, like some others, is known for, it is overkill, making mountains out of mole hills. Manufacturers do not specify changing it because for "most" vehicles you don't need to. The fluid being hygroscopic means almost nothing in this context. It means you can't leave a bottle open or use most of it, let it absorb ambient moisture then use the rest later. It does not mean that any significant amount will get into the braking system which being hydraulic is necessarily sealed, unless it is a design that draws in ambient air as it is used out of the fluid reservoir instead of having an expanding diaphragm design to displace the fluid level, which is far more common. If it makes you feel better to change it often, or if you observe overheating brakes (a sign you need better brakes, or better driving habits, or the vehicle is simply unsuited for the task) then by all means, change the fluid. If people were having brake failures from not changing it every 2 years, every manufacturer would recommend it and there would be a recall of many millions, decades of vehicles where this was not specified. The last thing a manufacturer would do is get this wrong when it's a service item at the owner's expense if it were needed. Then again manufacturers now have lifetime transmission fluid, etc. which isn't really true but trannys cost a lot more to fix than brakes once you notice some mushiness hot. The point is that you should consider changing it once in a while, every several years, but you shouldn't have any problem going 5+ years unless the brake system is defective by design and a fluid change won't really fix that.
Last edited: Oct 10, 2019
S

To my knowledge, Honda is the only non-European mfr to recommend any brake fluid interval at all! Most cars go to the junkyard with their original factory-fill brake fluid That being said, it's most practical to change the brake fluid when replacing the pads and rotors. This is what I do. Speed bleeders are awesome

If you have a defined, working way to bleed ABS, go for it, but I wouldn't do it with "shadetree" methods. The worst muck hangs in the corners, by your wheel cylinders and calipers. Bleed them and you're ahead of the game. Siphon your reservoir before you start-- it sees air and water even if it looks okay. Obviously refill with fresh before and after the job.
K

I'll do my cars every 2-3 years, but I won't recommend it to my friends who would have to pay for the service. I'll explain the benefits to them. They can decide for themselves whether they should get their brake fluid exchanged.
Z

I bleed mine dry, add fluid and close the valves. Used cars will get a bleed even if brakes look ok. If the fluid looks nasty I'll re-do it in a year. Otherwise it's plenty enough to just do it when replacing pads. I noticed the new VW manual says to do first flush at 3 yr, then 2yr subsequent. This is consistent with my thinking that new parts will not even have any corrosion to resist. 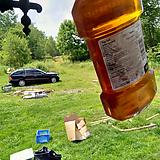 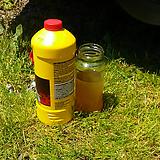 At one point I was told DOT 3 lasts longer than DOT 4 because it doesn't need the high temp character in it's formula, more anti-corrosives can be delivered. This is somewhat consistent with mfg recommendation, where Euros spec 2yr and others spec none.
C

Originally Posted by Zolton
I bleed mine dry, add fluid and close the valves.
Wait, what?

Bleeding brake fluid on a regular basis is a smart thing to do. More and more manufacturers are recommending brake fluid change as part of their maintenance. As mentioned above, brake fluid collects moisture, and when it does, it becomes even more corrosive, and can destroy brake system components. I bleed mine every 30k miles using a Motive brake bleeder, which is about every 2 years. The 3 year cycle that Honda recommends would be a good schedule too. But I personally wouldn't recommend a schedule much longer than that.
B

In the past I drained and filled the reservoir before I realized that was futile. I now do a bleed at the caliper at each pad/rotor change and leave it at there. Much better process.
N

Honestly I never change mine and have never had any problems.... Decided I'd be that guy. haha
W

Originally Posted by zfasts03
Change it! I would change it every 2-3 years. 5 years max. Brake fluid is hydroscopic. Especially in humid/moist locations change more frequently. I use a Mity Vac vacuum extractor and suck it out at the brake caliper bleeders. 1 qt usually does a car, unless it is a Z06 or something with big calipers with two bleeders per caliper. Then get 2 quarts.
Ya know everybody claims brake fluid is hydroscopic, blah blah blah. One guy says it, 1000000 see it, repeat it and another 10000000 etc and becomes a "truth" All internet experts LOL. A while back Ford engineers visited car recycling yards, took samples of brake fluid from these derelict cars, and what do you know- very little water was found in the brake fluid. So much for hydroscopic. The actual contaminants were leached metals from the brake lines. These contaminants are the bad guys that corrode brake systems. There are available test strips to check for this.
E

A lot of factors if you won't or will have issues if you never bleed your brakes. Where you live, if they ever overheated and the major one the vehicle in question. Our Escape is notorious for weak brakes, I've went almost 100k on one set with frequent bleeds. Our Focus though the brakes have never changed and I've never bleed it. I bleed the RVs frequently just because the weight. No one in family does it but they live in small towns and not a lot of hard braking.
T

Originally Posted by Gebo
It seems all my used that were serviced at the dealerships before my ownership had their brake fluid changed on a regular basis. Funny you mentioned this as I just finished doing the last of mine 5 minutes ago. That bleeder system where you use your front tire pressure is "THE" bomb! So easy....
This: https://www.speedibleed.com/products.html

Honda says to do it every 2-3 years but that must be because Honda uses different fluid and brake designs from everyone else....