The Denso box posted by Duck Ryder is as properly noted for the current China coo Denso FTF which came out of the box in his post. And all information previously covered by Hootbro and 92saturnsls and linked. Previous FTF was 'not' made in China, and it used red silicone adbv as 92saturn showed. Duck Ryder has another Denso FTF which show 2015 box date and also says "reliable'" not silicone. Odd not mentioned in the defense, is the current Denso website element type is also inaccurate for current FTF metal endcap type too. _Denso_150-2006__-_V]https://www.bo...s/4702354/[Cut_Open]_Denso_150-2006__-_V So ~2014-2105 would also be accurate for when member rustypigeon first posted the change on this subforum when FTF part number and coo change occurred. That thread also linked for reference and confirmation purposes. https://www.bobistheoilguy.com/foru...39/re-denso-oil-filters-new-part-numbers As Hootbro said in Duck Ryder thread referring to adbv and old, non updated Denso FTF oil filter info "It is not silicone anymore. That is old ad copy that Denso has not changed. They even dropped the silcone ADBV from their boxes." That is accurate from one who used both FTF filters. Along with 92saturnsls, two poster who used both FTF made filters. Considering their personal knowledge, until proven otherwise I agree with them.

I imagine Denso's website could have been wrong for years (since when their FTF filter COO changed from Thailand to China around 2014-2015) ... anything's possible. If Denso's website has been wrong that long then they are pretty sloppy, or purposely false advertising.
S

As regards the Denso FTF oil filter site info, even before the change of coo the site was inaccurate for the spin on element type. The previous blue box blue can FTF filter showed no endcap type element, when they too used metal endcaps. My personal opinion, when it comes the FTF oil filters at least, site accuracy doesn't appear to be a priority. All this said, I'm not saying nor ever said the current China made FTF is junk. They seem ok construction wise. Duck Ryder made an observation about cost for construction on his thread. I just preferred the appearance and construction of the previous FTF based on anecdotes posted.

Originally Posted by Sayjac
Originally Posted by RamFan
..You keep saying this, almost word for word. Have you actually reached out to Denso? I have and they've confirmed that the FTF filters are still built with Silicone ADBV.
Since you 'now' say you reached out to Denso, why don't you post a copy of the email correspondence for all to see. Seems odd to me though you didn't include that nugget in your Denso thread. I mention it because you did post 'that Denso said' the efficiency of the FTF was 90% but they provided no micron level or ISO test format. So basically meaningless.
I said in my original thread that I reached out to Denso. There's no just now about it. The response I received from Denso came roughly a month after the last post of that thread. Furthermore, the response I received from the Rep simply reaffirms their online literature which you seem to be taking with a grain of salt, so I didn't feel it necessary to revive an old post. Here's a screen shot of their e-mail though. 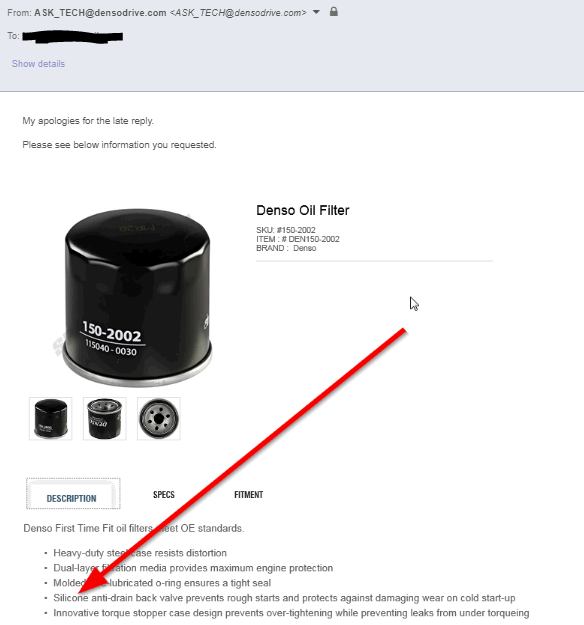 Nothing Earth shattering, simply a Rep responding to my inquiry with information that is readily available. As I, and other users have noted, these valves are extremely pliable. More pliable than any Nitrile valve I've every encountered. As has also been stated several times, Silicone does not have to be orange, there have been other instances of black silicone valves being used. Companies have been questioned about potential discrepancies on their sites before, most times when an error is noted, the company acknowledges an error. In instances where there is some shady practice going on, I think we can all agree that a company typically either doesn't respond or doesn't answer the question directly. I have a hard time believing that Denso would use their own source as evidence if the claim being made was knowingly fraudulent. We often see mea culpa statements being released due to decisions being made for the sake of profit seeking. So I'm of the mindset that big business should be questioned and should have to prove their claims and should also be comfortable releasing certain information i.e. efficiency rates, build material, etc.. In this case though, I think it's clear that Denso is not being deceptive.
F

Royal Purple has the valve made purple, Mann is white, some are orange red and some are redder red, and some are black. I think there is a grey one too maybe French. The standard is nitrile is colored black but that isn't a law. Someone in charge at a desk somewhere says they want this color. The person answering the email could be just looking it up on the website and assumes it's correct. The one not correct is the innards showing an element with no end caps in the Denso can. That's absolutely wrong and has been for probably 12 years.
S

From what I can tell you needn't have waited any period of time for a reply or to post a screen shot with arrow added. As noted, that information is readily available and comes directly from the site linked. Which is what I assume rep must have done. I don't see where he added anything to it. And that includes any follow up "90%" efficiency rating referenced in the other FTF dissection thread. Really, no reaching out required. https://www.densoproducts.com/product.aspx?zpid=41163 So agreed, nothing earth shattering in that em. Since that link information has apparently been available all along, seems odd it was never linked before. Of course that information 'basically' replicates the previous Denso site information posted multiple times, which also shows no endcap type elements under the current China FTF spin on, which is proven inaccurate many times over. If one can't trust all the site information, I'm not sure how one can pick and choose what is accurate or supposed to be and what isn't. I can't. Because of that I remain skeptical/unconvinced the FTF black adbv is silicone and still agree with the two posters I linked and quoted. As for other than redish/orange adbv colors used for what I believe to be silicone adbv, Mann uses white-ish and perhaps grey, Royal Purple- purple and Mitsubishi blue. All that said, as long as you're satisfied all that matters.
You must log in or register to reply here.
Share:
Facebook Twitter Reddit Pinterest Tumblr WhatsApp Email Link
Top