Thread starter
I just got my vehicle back from the dealership. The history is as follows. Took to dealership in June with cold start rattle and diesel like tick at 94000 miles. 1.5 months later got it back with laundry list of parts replaced. Got it back and still rattleing. Took it back and 2 weeks later got it back. Engine was smooth. Started cold start rattleing again with lots of other noise like whirring and ticking. Took it back. Under new tsb had it repaired. Now its silk smooth again. Engine now at 109000 miles. Here is parts list. The reason Im posting it here is I know a lot of guys have these 2nd Gen Ecoboost engines in their Raptor or F150. This post will help those guys out when they search on Google. 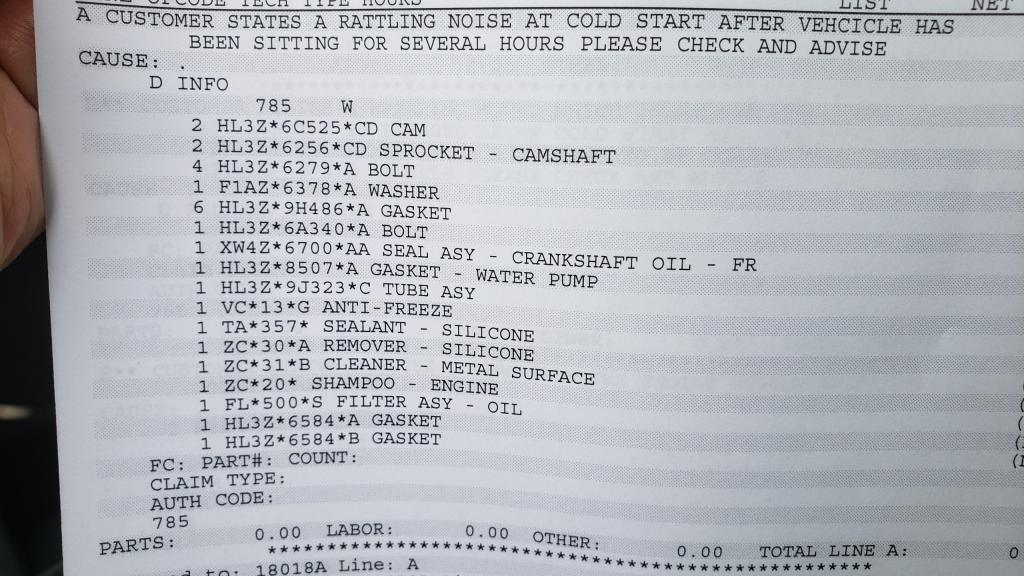 Thread starter
On my Youtube page you can see additional videos of the rattle and this was taken today.
N

Thread starter
The 2 camphasers replaced appear to be revised.

It's odd that Ford failed to properly address this issue. They've known about it for 15 years, and the Ecoboost engine is no different in this regard. Although, the noise is annoying, I don't believe it leads to failures.

Those are the latest numbers for phasers on that engine. There is a TSB regarding start-up noise stating to replace all 4. They have been on backorder forever, sporadically coming in with no rhyme or reason.

Also in case anyone was wondering, Ford is really cracking down on dealers making sure we bill all the OTU (One Time Use) parts on warranty repair orders. That is why you see all the parts on there that probably could have been reused. Ford also revised to procedure for oil leaks involving RTV seals which includes using the ZC-31B wipes and ZC-20 Engine Shampoo and Degreaser.
L

Did they question the type of oil you were using. Extended warranty?
S

another reason to avoid the ecoboost engines
N

Thread starter
My dealership doesnt question me about my oil changes at all. i drop my car off with a short letter of what I want done and thats it. Warranty is to 150k miles.
N

Thread starter
The Ecoboost is a great engine. Lots of power and fun. Makes just about any car go fast. However it just needs more time to be developed and mature. These boosted engines are still young.

It's amazing to me that a high production engine such as the Ecoboost has these failures, but not on every one of them. How is it that many of them go high mileage on the OLM with semi-syn oil and no failure? Is it luck of the draw or something more? There's simply too many of them out, doing whatever duty with no problems. If they were as bad as one reads, Ford would have discontinued the engine long ago. Makes me wonder what causes it, with it being such a happenstance thing.

Good to hear it's hopefully fixed. I'll remember this thread if/when mine starts to rattle.
N

Thread starter
If you look at the part numbers it appears this is the 4th variation of the cam phasers. My engine is now running very smoothly. I think they probably have a handle on it now...lets hope...
N

Thread starter
Pretty much all of these vehicles will get the rattle eventually. Some have the rattle right now but their vehicle is out of warranty and they choose not to fix it...live with it. The rattle isnt the only thing that happens...a diesel engine like ticking, less power and a whine of sorts. As pointed out all the parts are backordered now. Some guys waited a month for parts. Thus there is a lot of repairs underway. I would just go ahead and assume that all trucks without the revised parts will get the rattle eventually. Now this is a 450 horsepower high output engine. Most engines of this type use 0W40 or 5W40 and thats what I use...or at least a 5W30 on the thicker side. 5W30 is put in there for CAFE not reliability. However that wont stop the rattle. The cam phasers are flawed and it will do it evetnually.
1

I would like to know more about engine shampoo
N

Thread starter
This is the list of parts from the work performed in June when it first developed the rattle. Notice the sprocket or cam phaser part numbers. There have been A, B, C and CD versions. At that time I got version C and these cam phasers are version CD. 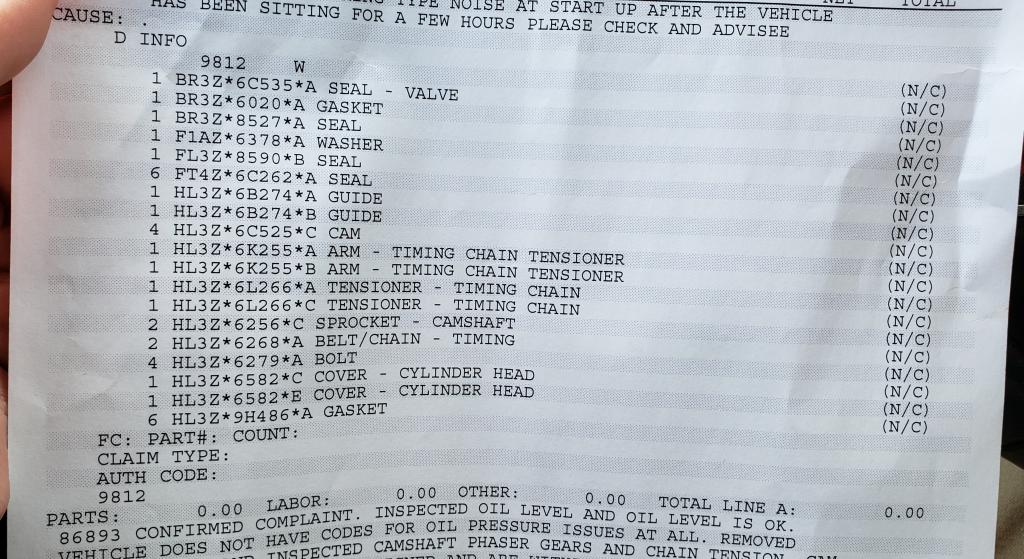 Originally Posted by double vanos
It's amazing to me that a high production engine such as the Ecoboost has these failures,
I really don't believe these are failures. Noisy and annoying in a high end vehicle, you bet! But a failure? I don't believe the noise is indicative of an impending failure. It seems there are folks who drive with the noise and don't experience additional issues.
N

Thread starter
Lets just say we dont know what will happen if these things are left alone. The noise is not just a noise but a vicious rattle on startup which shakes the front. The tick is loud and can be heard inside with doors closed. Im not certain if thats harmless.
D

Kquote=Navi]Lets just say we dont know what will happen if these things are left alone. The noise is not just a noise but a vicious rattle on startup which shakes the front. The tick is loud and can be heard inside with doors closed. Im not certain if thats harmless.[/quote] Just my opinion, but a engine as complex as this shouldn't be used as a high use, livery vehicle. One turbo ok, but I don't know why they just don't offer or develop, which we know they can because they have...a simple dumbed down version with suitable hp numbers. A engine like this has no business start/stop running 24/7 in NYC. and it's not a indictment on you, but there was a reason why crown Vic's lived as long of a life with a lot less hassle, and doesn't take a week to get to the water pump or certain parts fail as they will in this environment or when a repair needs to be completed. Again as will happen often in environment and usage such as yours.
Last edited: Feb 12, 2020
N

Thread starter
The only purpose built livery vehicle is the Lincoln MKT "Town Car" livery. The Explorer/Taurus was originally designed with police work in mind and that platform migrated over to the MKT. Its pretty awesome as its very easy to change both the ATF and engine oil out on them. Ive seen them get to 300k+. The problem is no one seems care for its exterior design, but besides that works great. The Continental Livery has same drivetrain. However everyone enjoys big SUVs picking them up but none of the SUVs are designed for livery work. So if these two seemingly inexpensive "sprockets" do the job then its just the 10R80 which is the weaklink. That was replaced at 70000 miles.
You must log in or register to reply here.
Share:
Facebook Twitter Reddit Pinterest Tumblr WhatsApp Email Link
Top