Was reading a couple threads where some discussion revolved around container size and returning used oil pertaining to the new six/twelve quart oil in a box. I remember a couple decades ago when I would have been part of that conversation. Happily I have moved on.

That's a big tank. I just pour the used oil from the drain pan back into the new oil (gallon) containers and take it to the auto parts store for recycling. Where does yours go when the tank is full?
Posted By: sloinker

Originally Posted by JLTD
That's a big tank. I just pour the used oil from the drain pan back into the new oil (gallon) containers and take it to the auto parts store for recycling. Where does yours go when the tank is full?
I haul it in periodically when I reach 20-30 gallons in jerry cans to a local garage that has a waste oil burner. Much less often now that I don't have a diesel pickup that takes 12+ quarts two or three times a year for scheduled changes.
Posted By: dlundblad

I need to find someone locally with a waste oil heater so I don’t have to go to AZ.

I have a few 5 gallon jugs I use, but they fill up quick.
Posted By: Sierra048

In the small town we live in we had three auto parts stores. One just closed down leaving us with a small non-corporate NAPA and a Carquest. None of them have ever taken used oil. Fortunately our trash transfer station has a recycling tank that's really convenient to use. There's also a Walmart that takes used oil but that's a thirty mile drive each way.
Posted By: FT92

I take it to the local advance auto parts store or to a local mom and pop garage for their waste oil burner
Posted By: Skippy722

I put it back in the now empty jugs when I’m done, and keep the extra 2qts to use as a fire starter.
Posted By: Olas

I pour the used oil into the now-empty jug that I just used to fill my sump.
The old bottle full of used oil stays in the garage until I go to the recycling centre
Posted By: Kira

Darn thing fills up quicker than you might think.

Gets poured into the catch tank at the closest AZ or AAP.

Used to have a town used oil tank but some dimbo poured paint into it and they locked the door.
Posted By: Sayjac

No doubt a nice piece of equipment, but I just don't need and couldn't justify such a purchase. I've kept a very old SuperTech oil jug around for years because it's an XOM product one with a wide mouth. Perfect with a large funnel. I either use it or in conjunction with the newly empty oil jug. And worst case, everyone must be able to save a couple old milk jugs when OC time approaching. As AZ is less than half mile from home, I just dump the oil on my way as part of some other errand.

If I owned a shop and/or changed oil quite frequently then I could see such a purchase making sense.
Posted By: Donald

I think NY requires them to take used oil if they sell engine oil or do oil changes. Something like that.

The best containers I have found for used oil are the large jugs for cat litter. They hold 3 maybe 4 gallons.

So get a cat, he will take care of mice and you will have nice containers for used oil.

The local shop I bring oil to, I just leave the jugs full. Do not wait for them to be emptied.
Posted By: supton

The town I used to live in would take auto fluids; the new town I live in does not. I'm kinda sad as Walmart will only take waste motor oil. I should call Autozone and see if they take coolant etc--although I might feel funny going in with a bunch of Supertech bottles.

I have a couple 2 gallon jugs that I fill up from oil changes and bring them to Autozone a few miles away. Between cars and the small engines I service they were filling up fairly frequently. Now our local town recycling picks up used oil containers if left by the curb, and for the Euro cars I service I use FCP's lifetime warranty so the old oil goes back to them. The containers take longer to fill now because it is mostly just from my small engine work.
Posted By: Bud

I use the large kitty litter jugs and take mine down to advanced auto.
Posted By: JeffKeryk

Last time , I took the old oil to one of the O'Reilly Auto Parts stores . Used one of these .

Originally Posted by Bud
I use the large kitty litter jugs and take mine down to advanced auto.
I’ve been using 2 of the wide mouth kitty litter jugs with a molded in handle for 25 years. They nest perfectly and are stacked in an out of the way corner of the garage. An annual trip to AZ gets rid of the old oil.
Posted By: 1nighttrain

Some of the mechanic shops burn the used oil to heat the shop and will take your used oil .
Posted By: Fattylocks

Originally Posted by WyrTwister
Last time , I took the old oil to one of the O'Reilly Auto Parts stores . Used one of these .

https://www.walmart.com/ip/FloTool-42003MI-Drain-Container-16-quart/44580714
I have that same wallymart drain pan and am not happy with it. Oil overshoots the lip every time messing up my otherwise clean driveway.
Posted By: opus1

https://www.walmart.com/ip/FloTool-42003MI-Drain-Container-16-quart/44580714
I have that same wallymart drain pan and am not happy with it. Oil overshoots the lip every time messing up my otherwise clean driveway.
I have a different version of that and am also not happy with it, so I go old-school; a galvanized steel pan from my Dad's garage and milk jugs or the old oil jug if I have one. Then it goes to either Autozone or one of the sites the Illinois EPA has set up for HHW disposal.
Posted By: KGMtech

I have a 30 Litre plastic Jerry Can, I take it to the local landfill when it's 3/4 full and dump it in their 1000 gallon waste oil tank. It goes to the local re-refinery in Breslau Ontario for processing into new engine oil.
Posted By: sohccammer427

What do you guys do with your worn out antifreeze? I have two gallons from a flush and don't know if I should just mix it with my used motor oil and bring to Autozone/Advance/Orielies? Wonder if they have a separate tank for coolant? Guess I could call.
Posted By: supton

Originally Posted by sohccammer427
What do you guys do with your worn out antifreeze? I have two gallons from a flush and don't know if I should just mix it with my used motor oil and bring to Autozone/Advance/Orielies? Wonder if they have a separate tank for coolant? Guess I could call.
Oil and water (coolant) don't mix. Don't do this. It contaminates the oil and ruins it altogether.

It's been years but I have heard some municipalities do allow coolant to go down the drain.

I would ask your local auto parts places to see which one will take antifreeze. You might have to ask some local garages, since they have the same problem. I'd make sure to ask how much they charge to take it from you.
Posted By: 1978elcamino

NEVER mix coolant with used motor oil . The resulting product will have to be disposed of as hazardous waste . Where I worked , we generated a lot of used motor oil . The environmental contractor that picked up the oil would ding us good if the oil was contaminated with any other product .
Posted By: exranger06

I have 4 oil jugs (5 qt) that I reuse over and over for waste oil. I bring them to Autozone and dump them into their container myself, or sometimes an employee will do it for me. I used to bring it to my town's transfer station, but they stopped accepting oil and antifreeze after some doofus dumped oil with PCBs there. So I go to Autozone for oil disposal now, but they don't take antifreeze. Now my only option to dispose of antifreeze is to go to the hazardous waste facility, which is a 12 mile drive each way, and they're only open on Saturdays for 3 hours (9-12), and only from May through October. They're closed completely the rest of the year. It couldn't be any more inconvenient. I have a few gallons of antifreeze I can't get rid of for the next 3 months.

I couldn't do without my waste oil caddy! Acquiring mine has a funny story......I was working at a shop that had several of them & a "new" mechanic didn't really know how to empty them, He strung a air hose all the way out to bulk storage tanks & hooked up the caddy. But he didn't secure the discharge hose, just slipped it on the discharge port & of course it popped off.
Oil shot up in the air probably 20 feet, Covering him & everything around the bulk tanks in used oil.....One of the funnest things I've ever seen in my life!! We called him Jed Clampett after that because he "Struck Oil"!

He somehow convinced the owner that the caddy was at fault & they were going to throw it away, It got put in the back of my truck & been using it for years!

For storage.....I have a 275 gallon composite bulk container, They last @ 5-7 years in the Texas sun before getting brittle. Reconditioned ones are dirt cheap ($50-$75) & are reasonable to get pumped out.
The one one the right is for antifreeze.

When it's EOL.....I put the empty container on the curb & a "scrapper" will pick it up for the steel frame. 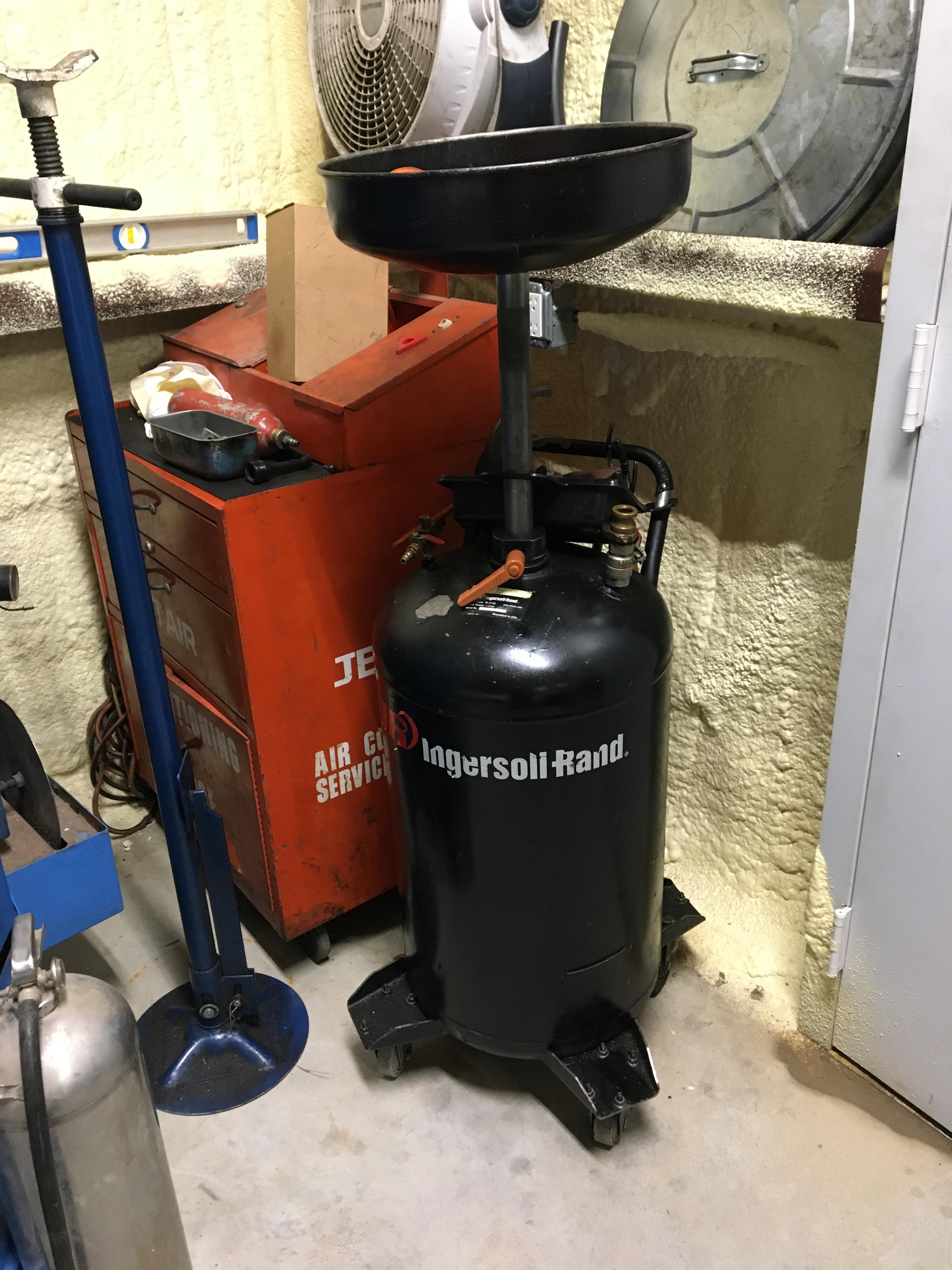 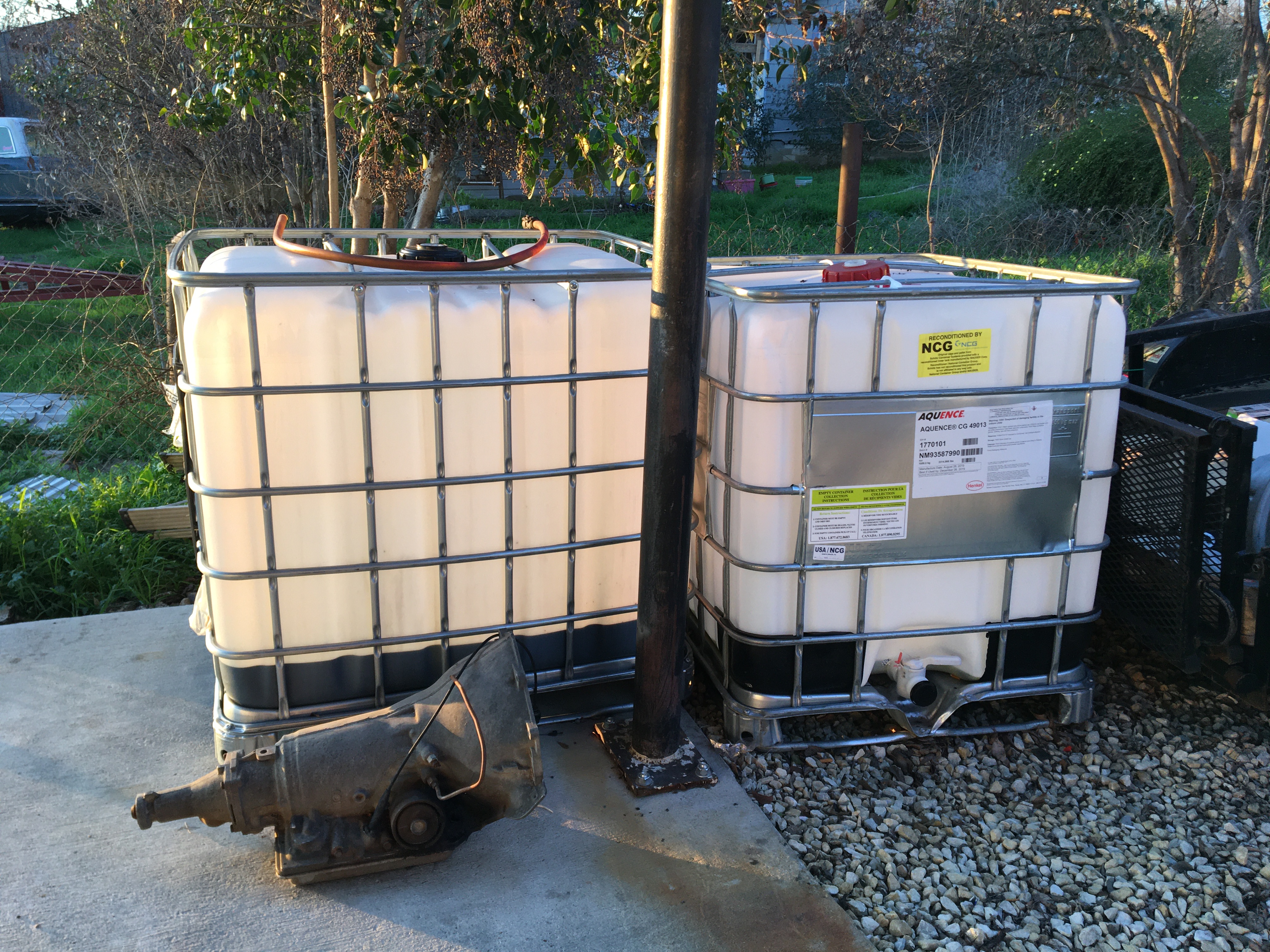 Well... mine goes right in the trash.
I live on a gravel road and when the G- man leaves my place there is always 3 big streaks for about 600’. Perfect! I’m sure some how dust is causing global warming so I’m going green here!
Some how I gotta one up ole Jeff so.......,
Roadway recycling! Yeah baby!
Posted By: JeffKeryk

Originally Posted by P10crew
Well... mine goes right in the trash.
I live on a gravel road and when the G- man leaves my place there is always 3 big streaks for about 600’. Perfect! I’m sure some how dust is causing global warming so I’m going green here!
Some how I gotta one up ole Jeff so.......,
Roadway recycling! Yeah baby!
I'm not gonna tell you I used to pour used oil down the storm drain at the end of the street...
Posted By: SevenBizzos

I use the used/empty 35lb. fryer oil containers I can pick up at restaurants. They hold quite a bit. Drop them off at a local oil place when filled.
Posted By: P10crew

Some people imagine this chore to be more difficult than it is.
As for me:
Before c. 1982 (unenlightened times): Spread it on gravel driveway to discourage grass and weeds.
c.1982-2004?: Store in old 1-gallon milk bottle, take to Advance Auto or Kmart.
2004-present: Store in old 5-quart engine oil bottle(s), take to county recycling center.
© 2020 Bob Is The Oil Guy