Not many details yet. Pilot ejected and survived.

Possible, but since they have had the kinks associated with that worked out for the last 40 years, I'm guessing it was something else.

The last big problem associated with an unstable airframe that was computer controlled was the F-16 aux power unit activation issue in the late 70s/early 80s that caused an aircraft pitch over. The less sensitive among us took to calling F-16s lawn darts at the time.
Posted By: ZeeOSix

The F-22 crash that happened today was only the 5th crash in it's history. Crash #1 was on a development model of the F-22. Crash #2 (which I read the official AF crash report and saw all the details) was due to the test pilot doing maneuvers that he couldn't recover from. He was killed when he ejected way above the safe envelope. Two of the five pilots were killed (one ejected and one didn't), and the other three pilots ejected safely.

Originally Posted by ZeeOSix
BTW ... the air frame isn't "unstable".
Like just about every fighter since the F-16 (and the B-2), the F-22 has negative aerodynamic stability, commonly referred to as "unstable".
Posted By: IMSA_Racing_Fan

Define "unstable". Every see an F-22 perform at an air show?

Originally Posted by ZeeOSix
Not many details yet. Pilot ejected and survived.

Like just about every fighter since the F-16 (and the B-2), the F-22 has negative aerodynamic stability, commonly referred to as "unstable".

A stable aircraft will tend to keep flying , pointedy end first , if there are no control inputs / correction . Like a paper airplane . But this can be a disadvantage for an air superiority fighter . Which needs to be able to make quick & sometimes violent maneuvers .

If the electronics are having a bad day , the plane does not have inherent stability ( like a good paper airplane ) and would / will have a tendency to swap ends with it self / go out of control . Without the electronics ( which can react faster than a human ) the plane is un-controlable / un-flyable .

None of this is from personal experience . I am not a pilot .
Posted By: skyactiv

Could be human error.
Posted By: Mr Nice

Luckily he ejected and wasn’t injured.
Posted By: Astro14

It crashed 12 miles from Eglin, so it was returning to base, not maneuvering.

The airframe is unstable. Without fly by wire control, it lacks stability. This gives it exceptional maneuverability. The stability is added back in electronically. Just like the F-16 (only a couple of generations better).

Not to guess but I honestly always have trouble imagining the skill level the skill the pilots have to fly the planes.
Posted By: 86cutlass307

Luckily, the pilot ejected safely; he is the only person that knows right now. Speculation is like throwing darts, the incident investigation team will sort it all out. I lived in this area for 11 years while stationed at Hurlburt Filed; one thing not mentioned is this time of year is Egret mating season...pretty large bird. While I was down there, Mr. Baker, the airfield manager would drive around and fire 40mm blanks to scare birds away before they finally installed an automated system. Has anyone seen any video out in the wild yet, that might be interesting to look at.
Posted By: BusyLittleShop 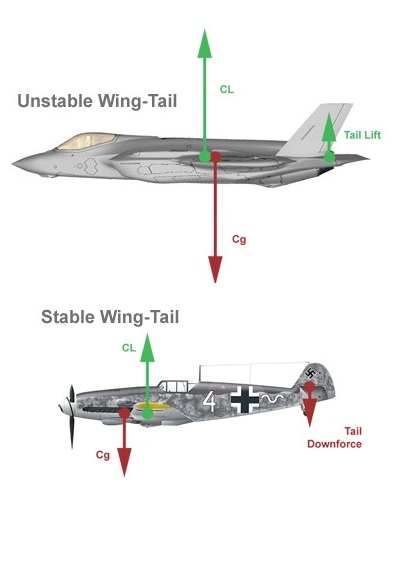 You can take a stable wing like the Ford TriMotor and make it less stable or
more maneuverable by adding weight in the tail and thus bringing the CG
closer to the CL as Tex Johnson demonstrates...