Are they worth the $28 price tag? They seem like a neat and easy way to drain the oil pan and definitely would save me from almost giving myself a hernia trying to bust my drain bolt loose, and I change my oil about 3 times a year because I drive a lot.

Anyone here have one and can chime in? Thanks!
Posted By: KrisZ

I can't say how they perform from experience, but the last thread about it prompted me to look for one for my Grand Caravan and I found it for $18 and change from Amazon. I'm still waiting for next OC to install it.

I would look for a better price than $28.
Posted By: rollinpete

Originally Posted by cwilliamsws6
definitely would save me from almost giving myself a hernia trying to bust my drain bolt loose,

Anyone here have one and can chime in? Thanks!

Your over tightening your drain plug.
If you have the clearance go for it.
Posted By: atikovi

Common add-on with Honda Insight owners because of the magnesium oil pan that is easily stripped by careless oil change techs.
Posted By: JustN89

I have one on both of my vehicles and they're awesome. No leaks, no drips, and no worrying about crush washers or anything like that. I highly recommend them.
Posted By: blupupher

I have one on my truck and Scion, and one going on the next oil change on the Hyundai.

I have had 4 other vehicles with them (Wrangler, Grand Caravan, Elantra and Trailblazer, no idea why I did not take them off when I sold them, I am sure the next owner probably tossed them).

The only con's I see is there could be clearance issues if it is a low vehicle and/or drain plug points downward, and it does drain a little slower than with the plug removed completely (but not that big of a deal for me as a DIY'er, an oil change place would probably hate it).

I know a few have said there could be "sediment" left in the pan since it raises the drain level 1/8" with the threads, but not a concern for me.
Also some are concerned with it getting "knocked" open, which would be very difficult, but they make a latch kit to prevent that if you are really worried about it.
Posted By: Patrick0525

I like my Fumoto valve and it makes OC a breeze in sub-freezing temperatures. Tool-less and no more stripped drain plug threads.

Fumoto use to recommend a hose clamp to prevent accidental release of the Fumoto lever. The hose clamp is over-kill. I just use one those bread wire twist ties preferably made from paper. It works great and is a no worry consumable item if you drop it into the “Drink” .... drain pan.

Without crawling underneath, I just reached under and snapped a pic. Hopefully you see the white twist tie. 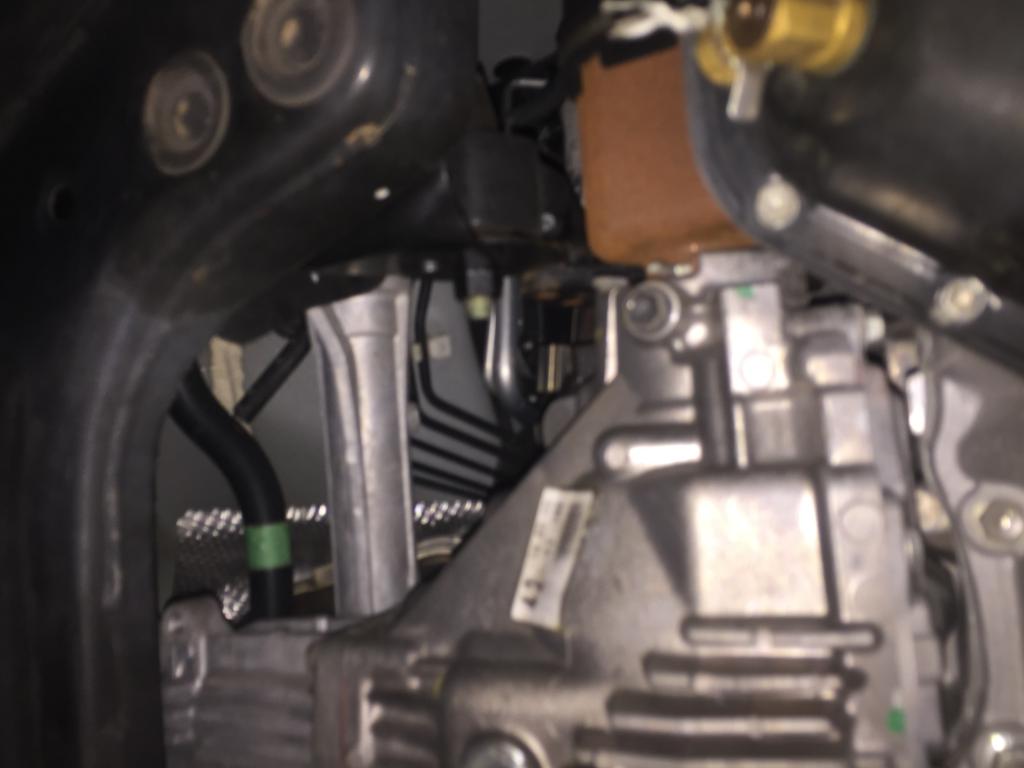 I use a few, but don't on others where it's too exposed. They're fine.
Posted By: earlyre

had one on my sable. no drips, or leaks ever.
they do run a but slower than the open drain hole...
and if you take it to a shop to have the oil change done for whatever reason, be ready for them to refuse, citing liability if they couldn't get the valve to close.

"where did you get your oil changed last? Do you know you don't have a drain plug?"
I've done every oil change on this car since i've owned it...and yes, I installed a Fumoto Valve.
"well, without the standard drain plug, we can't change your oil. the Liability is too risky if we couldn't get the valve to close"

at which point i did a quick search of the car, b/c i had had the OE drain plug in the car a couple days before...but it wasn't there.

they did report a completed oil change to carfax though.. and tried to sell me an unneeded air filter for $26.(had a spare at home already, and I had installed a restriction gauge in the airbox. filter was slightly dirty, but in no way needed changing.)
Posted By: Donald

I have one on both Subaru vehicles but not the truck. I do not use anything to lift vehicle or ramps. Slide in drain pan, feel the Fumoto and open it. I only need to slide in a little.

However if the mounting position would cause the valve to be hanging down, easy for rock to rip off, then I would have to think again. In the Subaru it's in a nice little opening, well protected.
Posted By: Flashlightboy

I have a couple on two different cars, even low clearance and it's never been a problem in more than a decade of use.

Fumoto now makes the black plastic clip that slides into the slot on the valve to make sure it's highly unlikely for it to open, even if hitting something. I guess the the better way to say express it is to say that if something is under the car that opens the valve through some awefully weird actions, the rest of the car probably looks lik poo with lots of other damage, making my oil drain the least of my worries.
Posted By: bobdoo

I've had one on my current truck for 3 years now. Love it. I just make sure to change the oil when the engine is hot. If I do an oil change on a cold engine it takes forever.
Posted By: tcp71

on our van since 2005. on both my trucks since 2011. Other than the drain speed, it's so much better. The new truck has one with a nipple and I've got a piece of hose permanently attached. I just pull the hose through a hole in the belly pan and direct the oil into a jug. Clean and practical. The van's is now 14 years old and going strong.
Posted By: blupupher

Originally Posted by cb_13
I've had one on my current truck for 3 years now. Love it. I just make sure to change the oil when the engine is hot. If I do an oil change on a cold engine it takes forever.
I am a change it cold person.
I just do other stuff while it drains (get oil and filter out, check coolant, washer fluid, etc).
Posted By: ARB1977

Had one for 7 years on my old Tacoma leak free and one on our 08 CRV. Did not install one my 15 Tacoma and 18 CRV.
Posted By: WhizkidTN

Originally Posted by JustN89
I have one on both of my vehicles and they're awesome. No leaks, no drips, and no worrying about crush washers or anything like that. I highly recommend them.

Ditto. All my cars have them.
Posted By: JeffKeryk

I have Snap-On wrenches.
Each to their own... All good.
Posted By: DoubleWasp

Great for vehicles with messy or screwy drain situations.
Posted By: cb450sc

Originally Posted by DoubleWasp
Great for vehicles with messy or screwy drain situations.
This is exactly why I installed one on my 2011 Kia Optima.
Posted By: BMWTurboDzl

I've read mixed reviews on them primarily due to user error in choosing the incorrect type of valve and/or extensions which resulted in either leakage or leakage via damage from underside impact.
Posted By: mrdctaylor

As others have said, if you do your own oil changes and the plug isn't too exposed, it is perfect. I love having one. I've owned my 2002 Toyota Tacoma since new and have had the same Fumoto valve on there for probably 16 of the 17 years. They are quality products and I would buy another in a heartbeat.
Posted By: K20FA5

I have one on my Silverado and like it.

I've never bothered with the 4Runner though. Since I have to remove 1/2 of the truck when I do an oil change (two metal skid plates to get to the oil filter housing), what's a drain plug?

It's nice on my Silverado though. Slide under and open the valve. Oil filter is right next to it. I can change the oil really easy with it!
Posted By: MPANELLI