Thread starter
Okay, its not mine, its my works, but Ive set it up the way I want. 187k miles, and after I fixed the neglected cooling and boost issues has been a great runner. 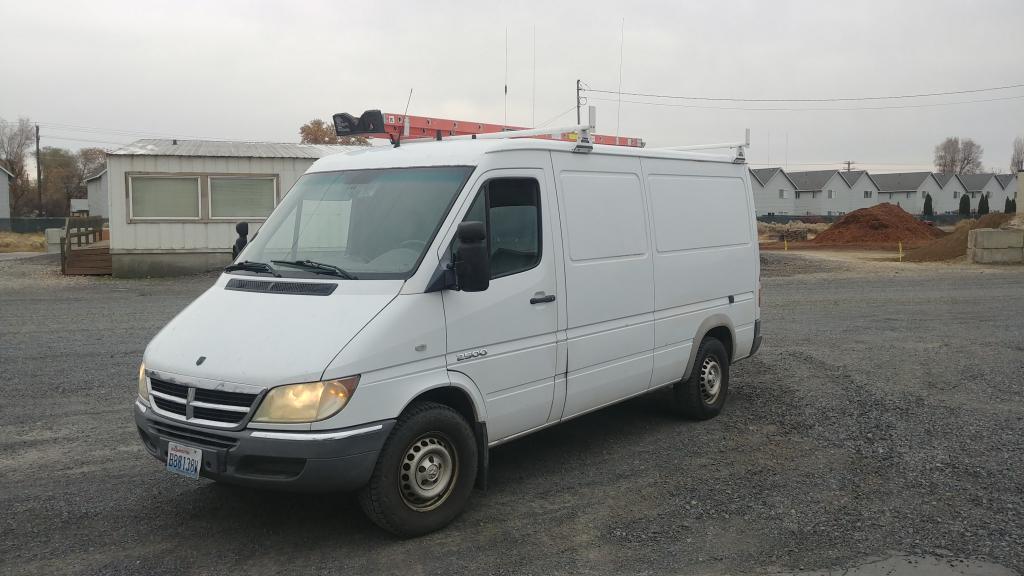 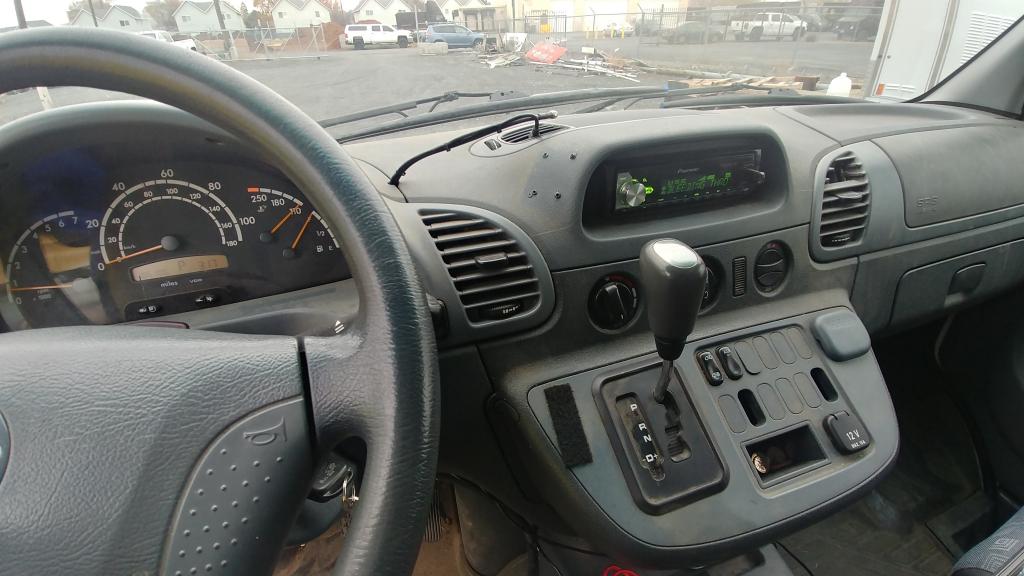 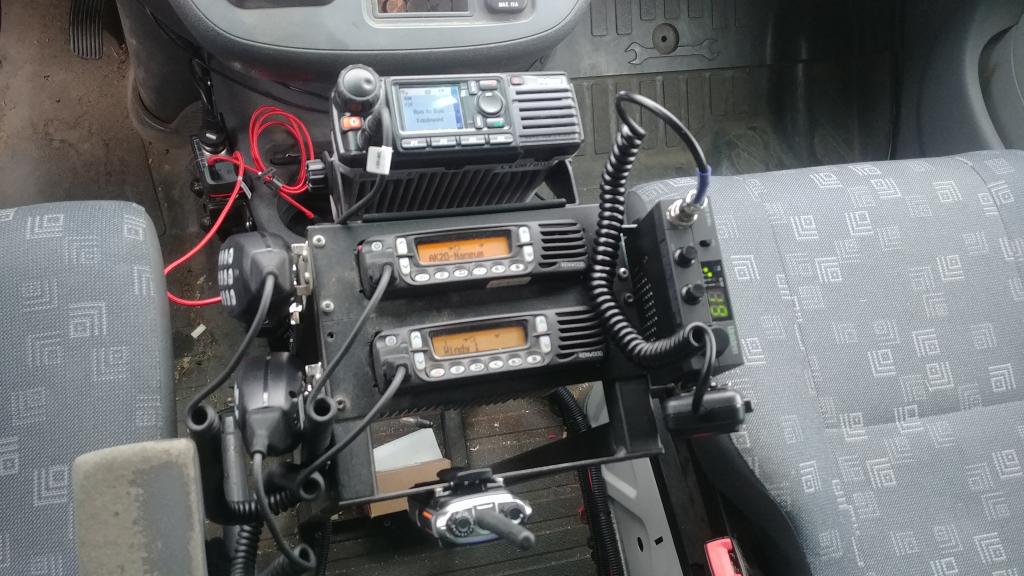 Top to bottom, UHF Hytera MD782 so I can get on a customer's system, Kenwood TK5720 P25 VHF so I can listen to State patrol which I scan along side some Ham stuff, and Kenwood NX800H so I can get on our Nexedge trunking system, but I also have it programmed with Ham and GMRS stuff. Oh and theres a Uniden CB I only use to inform truckers of their stupidity. 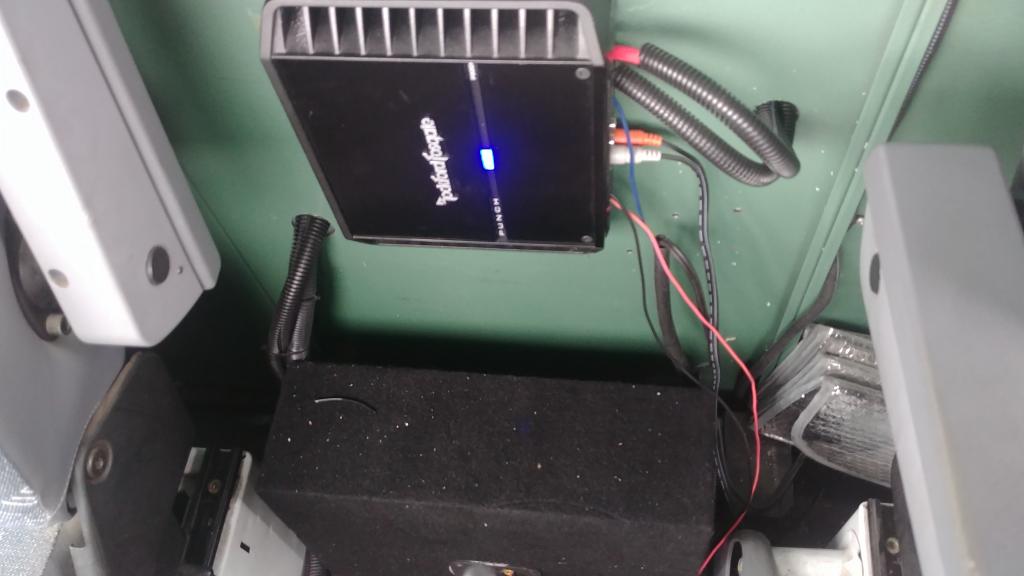 Rockford Fosgate P300X1 driving a JBL Stage 810 8". With the cabin gain its more than adequate. 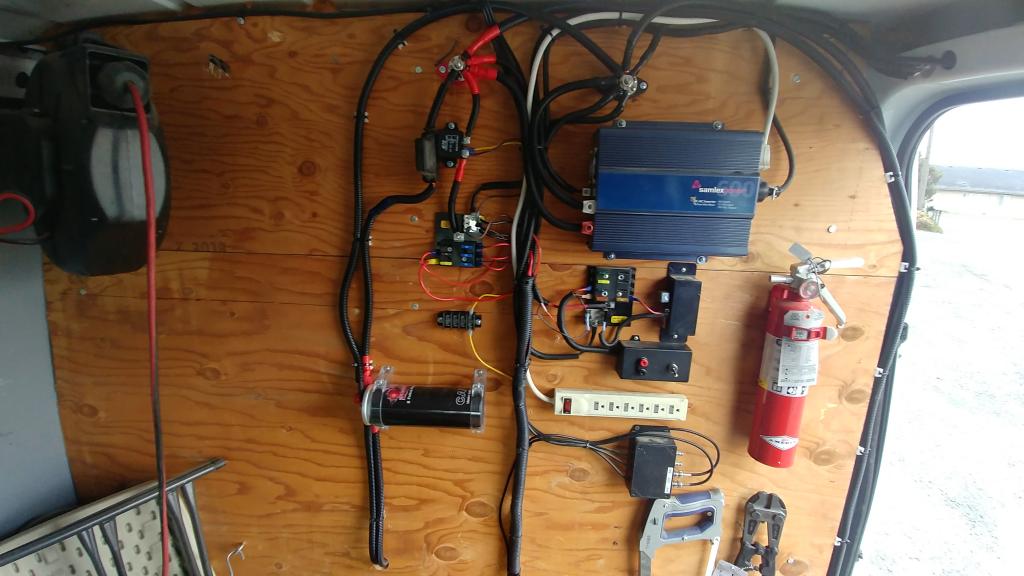 Only thing missing is the sticker for the tow company on the dashboard. It will come in handy one day, actually many days. Mine spent more time in the shop than on the road.....after 18 months the entire fleet was gone. Just crap!
S

Sad that such a nicely designed vehicle suffers from so many reported issues. I also know a fellow in the same biz as me and he has had nothing but issues, he even bought another one hoping it was a fluke. With Danno's large sample I tend to believe they stink....
S

Are the sprinters in the US with MB deiveline or some local Chrysler driveline ? Those sprinters with the 2.7 5 cylinder diesel and 160 hp is considered pretty bulletproof here in Denmark. I have made many with 600.000 km and often more on the clock.
P

Same in Frogland with the 2.2 and 2.7, considered very reliable. Most have manual transmission too, that helps. Those I drove handled very well on the road, IMO, compared to the equivalent PSA/Fiat and Iveco/Renault. A long time ago I worked in a car/truck rental company, and we had these Mercedes, with the 2.2 engine in different body sizes, good fuel economy and not too many problems - although I never was in charge of anything maintanance related.
M

They are not reliable but so much more advanced that a normal cargo van. Their unreliability helps sell Nissan NVs. My dad has a 2017 that had shift problems and they replaced the trans under warranty. Did not fix the problems. Yikes! Awesome set up, what is your profession with all that radio gear? I see some tools in the back.
G

Ya have heard nothing but BAD things about these !! And Amazon just bought a ton of these for their PRIME deliver service lol Dave
C

Thread starter
Yeah, Im well aware of the issues, lol, and I am waiting for it to one day give up on me but Im trying to keep ahead of any issues, by reading the sprinter forum. I did have issues when I was first given it overheating and going into limp mode. Fixed it with a complete cooling system overhaul and a new turbo resonator, which had cracked so was leaking boost. It got another plastic one though so if it lets go I have a company CC now it will get one of the aluminum 'resonator deletes' Im watching for the 'black death' injector seal failure and I also am planning on checking injector leak off next time I bring it in the shop for an oil change. That will kinda point out possible problem injectors and if one is an issue, Ill just replace it.
Originally Posted by maxdustington
Awesome set up, what is your profession with all that radio gear? I see some tools in the back.
Two way radio systems technician.
Originally Posted by shDK
Are the sprinters in the US with MB deiveline or some local Chrysler driveline ? Those sprinters with the 2.7 5 cylinder diesel and 160 hp is considered pretty bulletproof here in Denmark. I have made many with 600.000 km and often more on the clock.
Yes, MB 2.7 5 cylinder. And that is why my boss had purchased it, was the numbers he had heard other people getting with it. Part of the problem in the US is there is no one experienced with it to work on it. As an example, when they first bought it they had a few glow plugs that were bad. Took it to local Dodge dealer who broke off the glow plug in the cyl. head. Ended up going to Mercedes dealer 70 miles away for a cylinder head R&R so they could remove the piece stuck in it. AFAIK I dont even think all Mercedes dealers are capable of working on them either, only those that sell sprinters will have trained techs on board. So its pretty [censored] poor support network. And as rural as we are, yeah I pretty much will end up having to fix most problems we have with it.
Last edited: Feb 24, 2019
S

You really have to be easy with the glowplugs on the 2.7 CDI. But if you know what you are doing it usually isn't a problem. And any professional mechanic should know better than just turn till they snap.
S

I drove one a monster one these when I was doing service work. It was a great rig. I don't recall the exact weight right now, but I know it was heavier than my pickup by a fair amount. I took it over the scales and I want to say it was around 10,200lbs, or thereabouts. I was always so impressed with the mileage. Pretty sure I touched 19-20 mpg a few times on the highway. But it would routinely get 14-16 in town which I thought was amazing for what it was. Plenty of power. It was just a good rig.
C

Thread starter
Originally Posted by StevieC
Have you had issues with the front springs? The previous company I worked for had some of these in the fleet and the front springs always seemed to be an issue.
Not yet. AFAIK Its got the original 'composite' spring still in it, and as you can tell from the pics its not sagging at all.
Originally Posted by HighbrowHillbill
I drove one a monster one these when I was doing service work. It was a great rig. I don't recall the exact weight right now, but I know it was heavier than my pickup by a fair amount. I took it over the scales and I want to say it was around 10,200lbs, or thereabouts. I was always so impressed with the mileage. Pretty sure I touched 19-20 mpg a few times on the highway. But it would routinely get 14-16 in town which I thought was amazing for what it was. Plenty of power. It was just a good rig.
Yeah thats the other reason my boss likes it is the mileage. Not exactly a powerhouse, IMO. There are a few hills around here Im at or just under WOT to maintain the speed limit.
S

I wonder if it was a bad batch with ours then... Thanks for confirming.
C

Thread starter
Discovered last week that the muffler was about to fall out of it, and so I ordered parts from summit racing on the company card. Found 2.5" pipe fits very nicely over the stock exhaust, so I ordered a 4 ft section of their 2.5" 16ga aluminized steel exhaust pipe, another section with a 45 degree mandrel bend, and a Walker "Commercial vehicle" 2.5" aluminized steel muffler. Right at $100 delivered to the shop. It took probably 10 minutes to cut all the old exhaust out, and maybe 2 hours to fab up the new exhaust. I cut the original hangers off the old exhaust and reused them to hang the new exhaust. I mocked it up and tacked it together, then pulled it back of to weld it all up. After reiinstalling it, I connected it to the down pipe off the turbo and welded it up. Very simple and easy. Saved a bunch of time not going over the axle and just dumping it out the side. I did have to extend coming off the 45 degree with a piece of the original pipe. I shouldve ordered 2 of the 4ft sections of pipe, but it all worked out anyway. Its a little throatier and can hear more turbo vacuum cleaner noise, but the Walker muffler keeps it all legal.
M

Thread starter
Originally Posted by madRiver
Rot boxes around here.
I just need to get like a couple years out of it, maybe less, and then Ill ask for a better replacement and they will give it to me because they cant replace me.. Ill find me a nice F250 XL or XLT with the 6.7, Ext. Cab, Long bed 4x4 and put a workman shell in the bed.
C

Thread starter
An update: Crossed 200k miles. I had switched it over to Rotella T6 5W40, but Im about to switch it over to the new 15W40 T6 for higher HTHS. Everytime I read about one of these spinning a bearing, they were running hot and heavy up a hill with some Euro 5W30 or 0W40 in the crankcase. Yeeeah no, I think its a hard working little engine and needs all the help it can get to last. I had to put a new crank pulley on it shortly after this pic too. The rubber shrank, and released the harmonic balancer off the pulley. I noticed while idling it, that it had an extra 'knock' coming from the engine. When I looked under after shutting it down, I could see it wasnt lined up on the pulley, and I was able to grab it and move it. 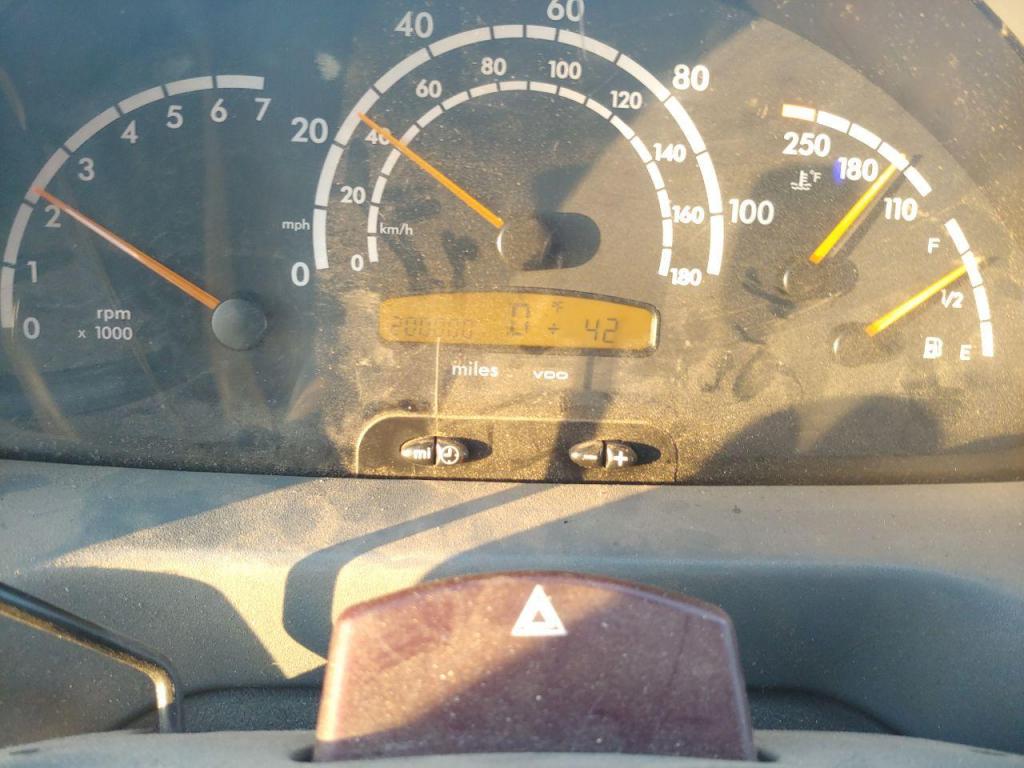 Upgraded the lighting. I do go off road quite a bit with this. A 42" light bar I call my UFO light on the ladder rack, and a couple of small 4 LED lights mounted off the front steps in the bumper. I also put a 'eagle eye' led on each side of the bumper pointing kinda sideways, to light the edge of the road/trail. That UFO light btw desenses my VHF radio by about 22db, and the UHF radio by about 17db. Its horrendous. But, I use it rarely and just factor that in to my usage decision. I could try another light, but, in all likely hood, another one will produce just as much RF noise, and you cant try before you buy from amazon or ebay. 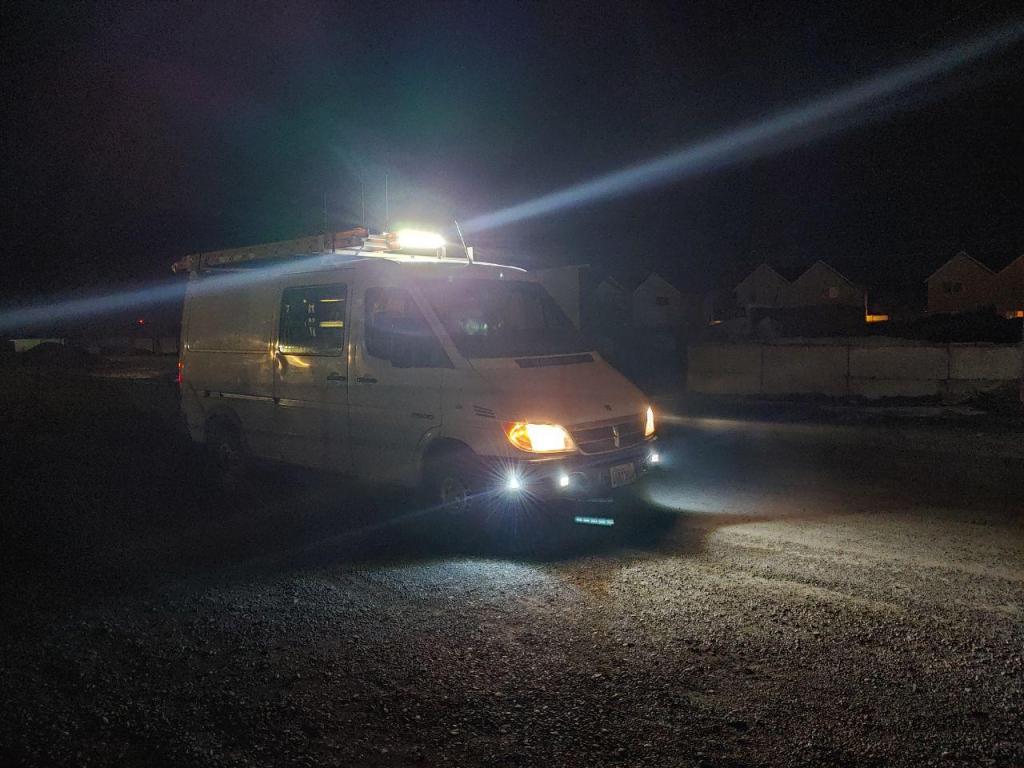 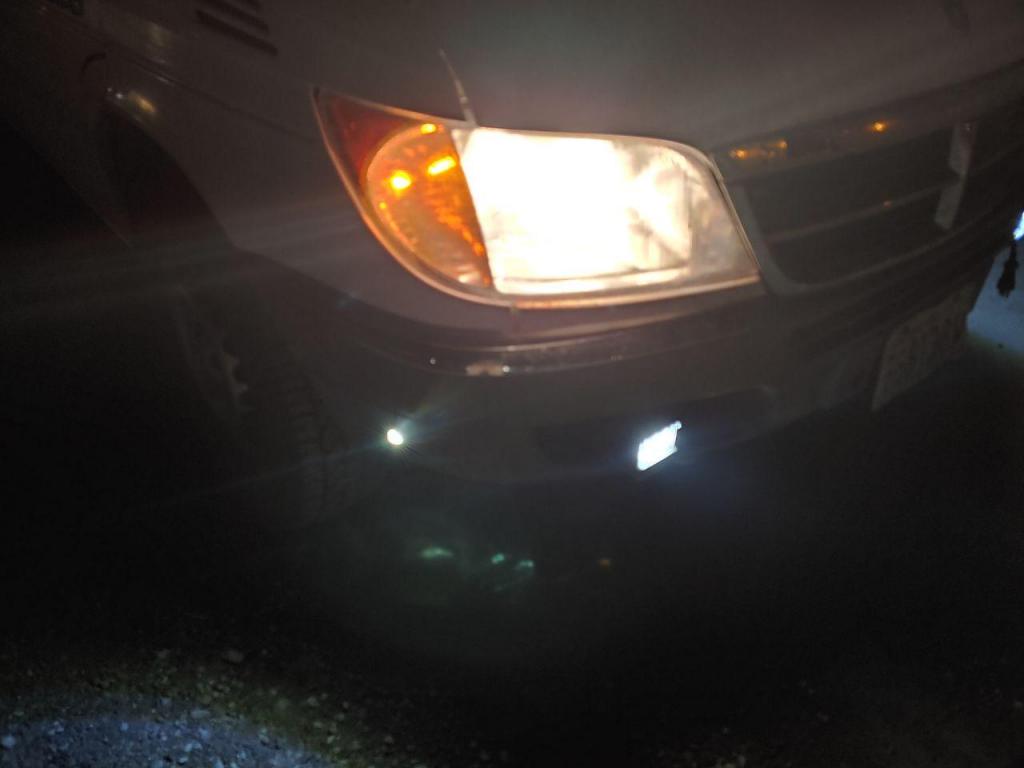 I upgraded my 2F cap for my sub amp to a 60F supercap bank. I think the thing cranks faster with that bank on it, even that far away from the engine. It feels like I upgraded the battery. Especially noticeable when its fully cold soaked. 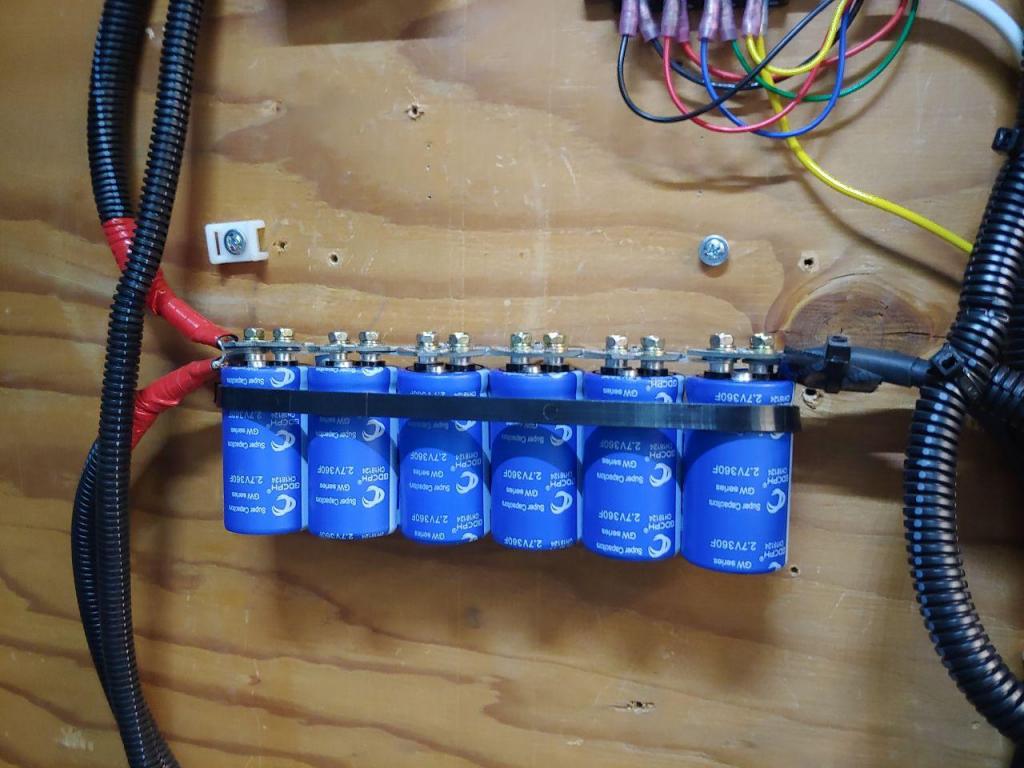