Thread starter
Found this while doing service with a good friend on his loved ones car (Peugeot 107 1.0, same platform as Toyota Aygo) : 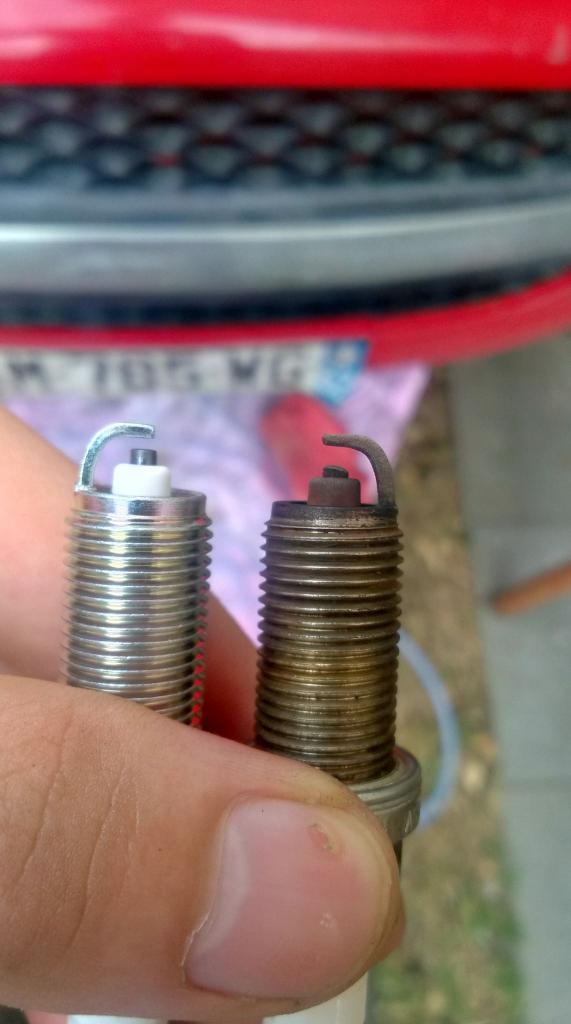 The engine is a Toyota 1KR-FE, 3 cylinder NA petrol, 998ccm. 130000 Km. the Spark plugs (Denso K16HR-U11) seems to be from the factory. They were rather hard (but not doing noises while unscrewing) to unscrew. They were only causing misfires at full load or so. No starting issues or whatever, I was really surprised with a gap close to 2mm ! We fitted NGK LFR6C-11 as a replacement with a line of copper antiseize paste on the threads. So far so good.

The bigger the gap the better, as long as the spark still jumps it.
K

I've seen that on some cars I had long time ago. I get a chuckle out of reading posts from guys who quibble over a few thousanths in gapping spark plugs.
S

Impressive. Under load there is more air in the cylinder and it gets hard to jump the gap. But at idle it doesn't take much. Ergo, they will go a long time.
B

It would be interesting to see the fuel economic numbers between the old & new plugs-I bet there's a slight decrease with the new ones.

Thread starter
Originally Posted by supton
Impressive.
We tried to regap one to 1.1mm but it made an awkward shape off the ground electrode and we were afraid it could then break inside the cylinders. Ended up making a spark plugs run to the local parts store, around 10â‚¬ for one NGK copper plug... Could have put Denso Iridium Power for same price ordering online! But hey couldn't blame the local stores seeing how random do people replaces spark plugs...

Thread starter
Originally Posted by bullwinkle
It would be interesting to see the fuel economic numbers between the old & new plugs-I bet there's a slight decrease with the new ones.
Of course more on that later by the final driver. But first drive today she basically told that she no more needs full throttle to take off from a dead stop. But the air filter was shot too (gray 70%), and the oil... Well... That's another story telling ðŸ¤£
Last edited: Apr 16, 2019
R

In the 70's there was an capacitive discharge ignition the Delta Mark 10. It discharged a cap at 400 volts into the coil. We use to use them and gap lugs at .060 when the standard as .025 to .035. This required some reforming of the outer electrode to get it parallel to the center. I never had one break, despite what the plug companies say. It was hard on plug wires, caps, rotors of the day, there were some ones with resistors in the plug cap that held up better, then I found spiral core ones, even better. With this we all got 1 to 3 more MPG, when average MPG was 15 this was huge. It was also possible to modify the carb to open the choke more after starting by modifying the vacuum break, and open quicker by changing adjustment of thermostatic coil. On my car, with 350 and Quadrajet I also increased the metering rod diameter by .001. added dual exhausts, and made a dual snorkel air cleaner with hot air on both snorkels (made from 2 air cleaners) im improve cold weather running with the lean carb. My 69 impala that would then pretty regularly get 21 MPG, this was huge when the first gas crisis hit. That crisis was so bad I used to make extra money sitting in gas lines for some locals like the doctor, the insurance guy next door. I did not let them idle. I would do my homework while waiting. Rod

Yes, Iâ€˜ve pulled out Iridium plugs that were factory gapped at 40 thousands and were now 70 thousands at over 100,000 miles later. The modern coils have no trouble with that. They ran fine. GM has been advocating 100,000 miles on Iridiums for over 10 years.

We have a Hyundai SantaFe with 165,000 miles on the original iridium plugs. Runs perfect. I can only imagine the gap on those.
A

The gap is too large. Gap should be factory spec'd and the ECM, coil packs, etc., were struggling to spark hence why misfire when driving under load. You made a good call to replace the plugs.
P

Originally Posted by Kestas
Aren't larger gaps tougher on coils?... perhaps reducing their life?
Yes, because of the higher voltage. More apt to break insulation down. Not saying it's a direct correlation, but just that you are correct, it will tax the parts more. Higher voltage should mean more power required too, not enough to drag mpg down but the ignition system technically is going to run warmer as a result.
R

Originally Posted by RDY4WAR
That's quite an impressive gap. My 2002 Tahoe 5.3L called for .060" gap originally but was later changed to recommend .040". I ran two sets of TR55 plugs, one set at .040" and the second at .060", and didn't notice any cold start, hesitation, response, mpg, nor power difference.
Do you remember if that new gap was for the factory platinum plugs, or did it come along with the recommendation for iridiums? I changed my 2001 5.3 to iridiums in about 2007, and their gap spec was .040.
N

I regapped a set of Denso Platinum TTs to .035" per Subaru spec for a friend's car even though Denso says don't gap them as they are preset to .040" or 1mm. I should have left it alone although it did work. On a previous car, I had 160K on the OEM Denso PK20R-11 plugs that were indexed by Toyota(they were stamped with an A on the terminal end). The other day ago, I had to look at a Kohler engine on a old Cushman greens rotocutter for dethatching lawn bowling/crochet greens. The previous club members installed a ACDelco R43LTS plug for a SBC when Kohler doesn't use tapered seat plugs(OEM is a Champion RC12YC). Installed a Denso K16PR-U11 and it now starts within 3 pulls. Before, it wouldn't fire until starting fluid was used.

Originally Posted by Rhymingmechanic
Originally Posted by RDY4WAR
That's quite an impressive gap. My 2002 Tahoe 5.3L called for .060" gap originally but was later changed to recommend .040". I ran two sets of TR55 plugs, one set at .040" and the second at .060", and didn't notice any cold start, hesitation, response, mpg, nor power difference.
Do you remember if that new gap was for the factory platinum plugs, or did it come along with the recommendation for iridiums? I changed my 2001 5.3 to iridiums in about 2007, and their gap spec was .040.
I can't remember, but I assume so. The OEM manual in the glovebox says .060", but when I look it up online it says "Updated .040". I'm guessing they may have been having misfire or ignition issues/failures from the wider gap. I just run them at .040" now since that's close to what they are out of the box.
P

Mwahahahaha, Those looks nothing like the ones I pull from my SIL's '99 Toyota Celica. They didn't have the little point anymore... all 4 of them. (beside being all black+rusty) She was like, "what did you do to the car?", it works now....

From my old Corolla, old plugs were causing no issues: 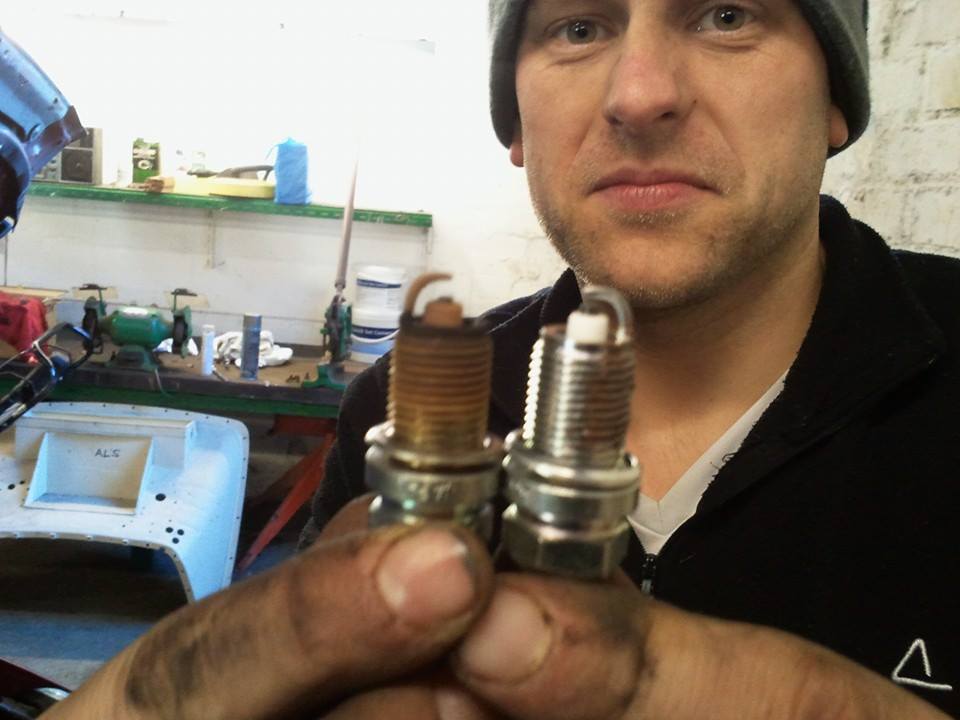