i have been looking at a lot of vehicles lately. i really like the new style outbacks in the 2011 to 2014 range. can get them for $10 to $14k depending on condition and mileage. most of the ones i have seen are about 120 to 130 k miles the one thing that concerns me is the CVT. read they have a lot of issues with them, but like a lot of stuff it might be blown up. So anyone have real world experience with working on the CVT or it real longevity?
J

Failures of the Subaru CVT are below the average for all other cars.
B

good luck!!!! if it goes your ride is JUNK. the newest ones have an extended warranty on it so they can sell them!!!
W

Subaru have among the most reliable CVT on the market now. The newer ones 2018-2020 have no issues at all to speak of.
W

Originally Posted by benjy
good luck!!!! if it goes your ride is JUNK. the newest ones have an extended warranty on it so they can sell them!!!
and this is my concern. i have read that no on repairs them and the only place to get them is from Subaru at the tune of $8k

Change fluid every 30k and that should be sufficient
F

Originally Posted by benjy
good luck!!!! if it goes your ride is JUNK. the newest ones have an extended warranty on it so they can sell them!!!
Subaru has no trouble selling their cars!!! If you owned one you might understand this!!! To the OP, if you like these Subies, then why not? Subaru's CVT implementation is probably better than that of most makers as well as better than many conventional geared automatic transaxles. Many current automatic transaxles have problems and Subaru's seem to have fewer than most. I only own two Subies, so what do I know?

The Subaru CVT is NOT among the most reliable on the market currently- the extended warranty is in place for a reason. That said, it's not nearly in the same realm as Nissan CVTs. Personally, I wouldn't buy a CVT that's not Toyota or Honda (surprisingly, Honda's CVT has actually been pretty solid). That said, Subaru does have pretty unique offerings so if you find that you really want one, just have a good maintenance plan in place and buy what you like.

CVT's are not my cup of tea but the Subaru units seem to be reliable enough, if you said Nissan run don't walk.
1

I work on a LOT of Subaru's (not dealer level, but a fair amount). I've seen exactly one CVT fail. So, I wouldn't say it's a huge problem but it's not inconsequential. Subaru extended the warranty more for "customer satisfaction" than anything, which I thought was very loyal of them, all things considered. Take the Ford DPS6 in the Focus/Fiesta. It took them YEARS of updates, TSB's, warranty repairs, etc. to admit that the transmission had serious issues and therefore extend the warranty (which should have been an entire buy-back, a la VW dieselgate, IMO), whereas Subaru realized early on that there were a few common complaints, some teething pains, and PROACTIVELY extended the warranty to put their loyal customer's collective minds at ease. This, to me, shows a company that's willing to admit when they rushed something to market that may have have left a bad taste in buyer's mouths. That being said, I absolutely can not STAND how Subaru has their CVT's programmed. I don't really care for any CVT, however when it's paired with a smooth engine... say a Nissan VQ for example, it's actually not so bad. When paired with a noisy, under-powered flat-4 in a heavy AWD wagon, it flat out ruins the drive. Even the new Corolla's that have the "fake shifts" programmed in feel better. If I were you, OP, I would base my decision much more on the driving feel than the thought of reliability. I encourage you to go drive any CVT equipped Subaru for an extended period and see what you think. Most dealers will let you take a car for an afternoon, without a sales person, so you can get a true feel for the car. It doesn't really matter what model you drive, Subaru's are like Lego's: it's basically the same chassis with different looking bits bolted to it. Just drive it in varying scenarios, speeds, surroundings, etc. and see what you really think. You may feel different than I do, but I couldn't live with one day-to-day purely based on the rubbery feeling the CVT gives the car. *Note* I have the same feeling about any automatic Subaru, CVT or not. The boxer engine has never had much for torque, and I've never felt than ANY automatic Subaru has had good driving dynamics. This includes the H6 models and turbo models. The automatic just kills it. I have a customer with an automatic WRX, 2.0 turbo, and it's the most gutless embarrassment in the world. Same with a Legacy, Forester, Tribeca, whatever. Subaru - clutch pedal = bore fest. Just my .02
1

Originally Posted by WhyMe
Originally Posted by benjy
good luck!!!! if it goes your ride is JUNK. the newest ones have an extended warranty on it so they can sell them!!!
and this is my concern. i have read that no on repairs them and the only place to get them is from Subaru at the tune of $8k
To add to my previous way to long post, the majority of the issues with the CVT in these cars has been traced to the valve body and solenoids, which can be replaced in the vehicle. It's still not cheap, but it's not $8k. It is true that there isn't a rebuild program for these units, but there are replaceable bits on them.

OP, disregard benjy, the resident anti-everything member, especially anti-Subarus. Because anybody can see, this whole failing CVT thing is sooooo bad that Subaru just celebrated its 12th straight year of increasing sales. You know, because loyal customers like buying new cars with the same problem as the old one, and it's such a great failure that these masochists are convincing their friends to buy them, too! 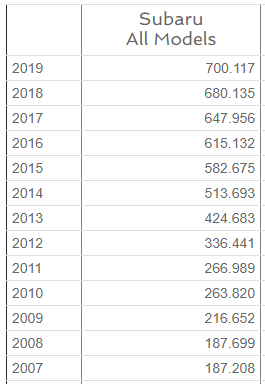 Subaru builds a solid car. We've owned multiple Subaru vehicles since 1995. Their harshest critics are those who have never owned one. Those folks can always detail all the shortcomings. Gas, oil, and tires has been our experience. Wife just bought a '20 Legacy. As far as she is concerned there is no other car company even in the same league.
1

Originally Posted by SubieRubyRoo
OP, disregard benjy, the resident anti-everything member, especially anti-Subarus. Because anybody can see, this whole failing CVT thing is sooooo bad that Subaru just celebrated its 12th straight year of increasing sales. You know, because loyal customers like buying new cars with the same problem as the old one, and it's such a great failure that these masochists are convincing their friends to buy them, too!

Perfect example of what I was saying. Customers didn't blink an eye at the CVT issues, because Subaru handled it with class and beat the negative press to the punch. They owned their own destiny, and learned from it. The Lineartronic debuted in 2010, and after one year of flat sales they've increased sales by 60k units a year fairly consistently. That number doesn't break down CVT vs manual's, but I'd bet it's 10:1 in favor of CVT.
J

People love their Subies; heck many are rabid and wouldn't have anything else! There's a reason for it.

At some point after 2016 Subaru upgraded the CVT and the upgraded one has a filter I believe. I sold my 2015 Forester at 80K and no CVT issues and no change of CVT fluid. My wife's Crosstrek has about 60K and no CVT issues. I do not care one way or the other about the CVT. If I was not thinking about the CVT I would not notice anything about it compared to a normal auto tran. Both our Subaru vehicles have been trouble free. But nothing like my pickup with its 440HP turbo diesel when it hits the turbo sweet spot about 1900 RPM.

Originally Posted by JeffKeryk
People love their Subies; heck many are rabid and wouldn't have anything else! There's a reason for it.
I've had my shots, Jeff! No rabies here

You'll never catch me saying Subarus are perfect; even though I've had many, I chastise the sales/engineering departments for always playing it "safe".... nothing is ever a big departure from their established norm: see Ascent, which is just a "Honey I blew up the kids" Outback. But what they're selling- lifestyle, safety, AWD, and reliability... boy, they've got that blueprint down! Insane residual value doesn't hurt either- I haven't seen any other brand where you can get a 2-3 year old model with 40k miles on the lot for just a couple hundred bucks less than the brand new model, and they move off the lot just as fast as new. That's probably the best show of confidence in a brand I can think of.
W

The Subaru Impreza has the highest resale value of any compact car on the road. That is Kelley Blue Book. So either the entire used car market is dumb, and Subaru Leasing must be. super dumb for assigning a high residual value to these cars at the end of a lease, or there isn't a problem with these cars. Subaru no longer offers the 100K extended warranty on the CVT. That ended two years ago. It is bizarre logic to claim a company that offered a free warranty extension is doing a bad thing and their product is bad, that is like claiming black is white, but that is how some people think. In that case the fact Subaru has now ended the warranty extension means their new CVT are now good, right? Because you can't have it both ways.

I extensively drove a Subaru Brat in the early 80's. Sometimes I felt like jumping out and running along side it going up a grade, it was that slow. I was stuck behind and passed a battalion of Subaru's on my last Coastal vacation, that may have been a lifestyle choice instead of an under power issue, I don't know. I do know many folks that love and praise Subaru's. I also know many folks that want to fight you when you mention the word Subaru. I haven't heard anything about the CVT's but have heard much about head/head gaskets over the years. I have heard that problem has been resolved but I'm thinking it may still be around scoping out the small demographic of Subaru owners I know presently. A few years back my coworker was contacted by Subaru to have his engine replaced due to some piston issues the factory knew about. They took his forester with the 6 cylinder, turbo I think, and kept it for 2 months while he drove their loaner. He's extremely happy with his, the new motor has 80k and the transmission has 100k miles. I think his is a CVT but am not sure, its about 4-5 years old now. I'm sure I will hear about it if it should have issues. Another coworker had his 4 cylinder with a manual transmission Legacy grenade an engine @130k miles. he installed a long block. We shall see how that lasts. Does Subaru still offer a manual transmission?
You must log in or register to reply here.
Share:
Facebook Twitter Reddit Pinterest Tumblr WhatsApp Email Link
Top