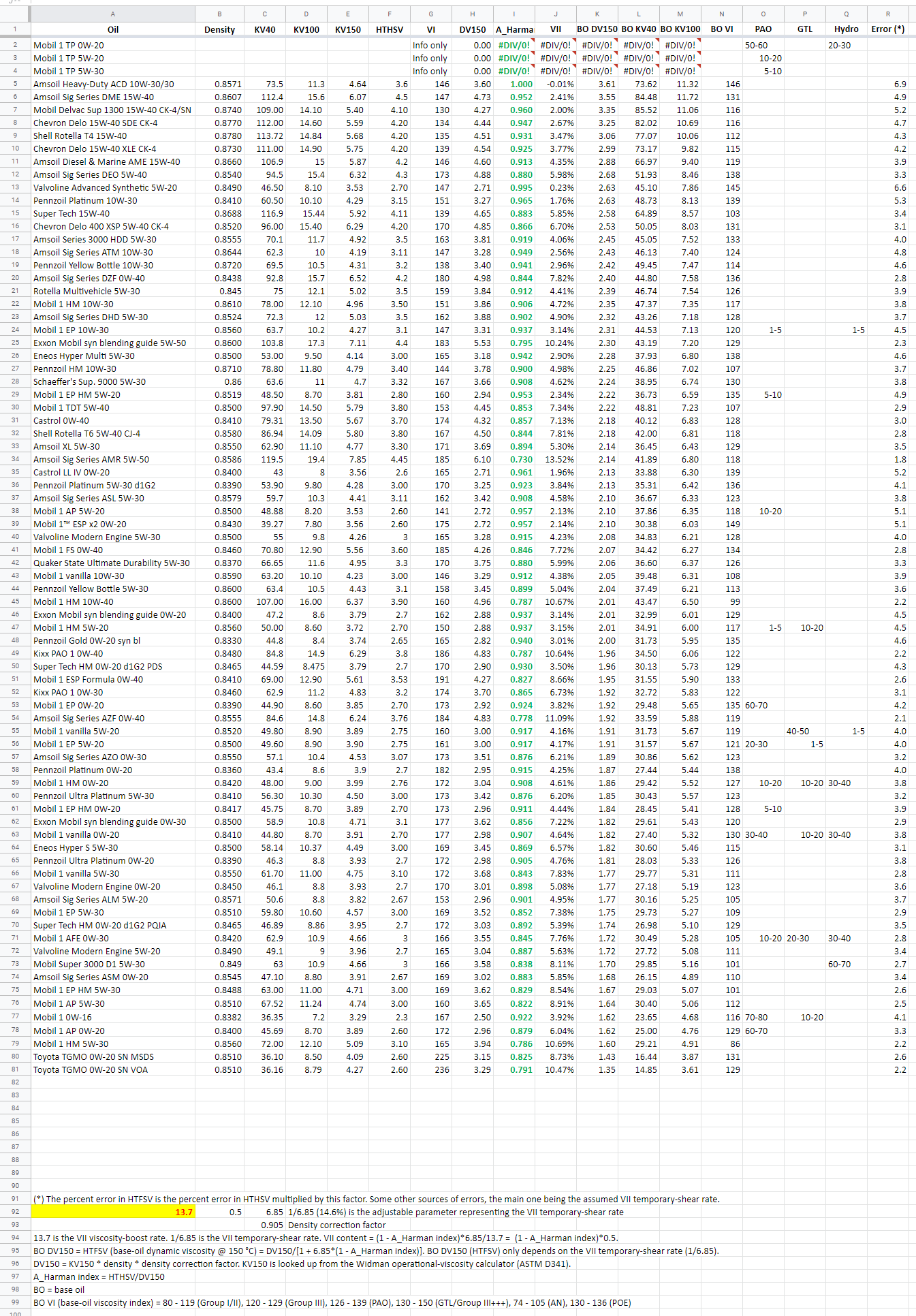 Thread starter
I set the calibration parameter to 10.5/2 (older value was 13.7/2) after comparing it against actual test oils. Here is the theory behind: 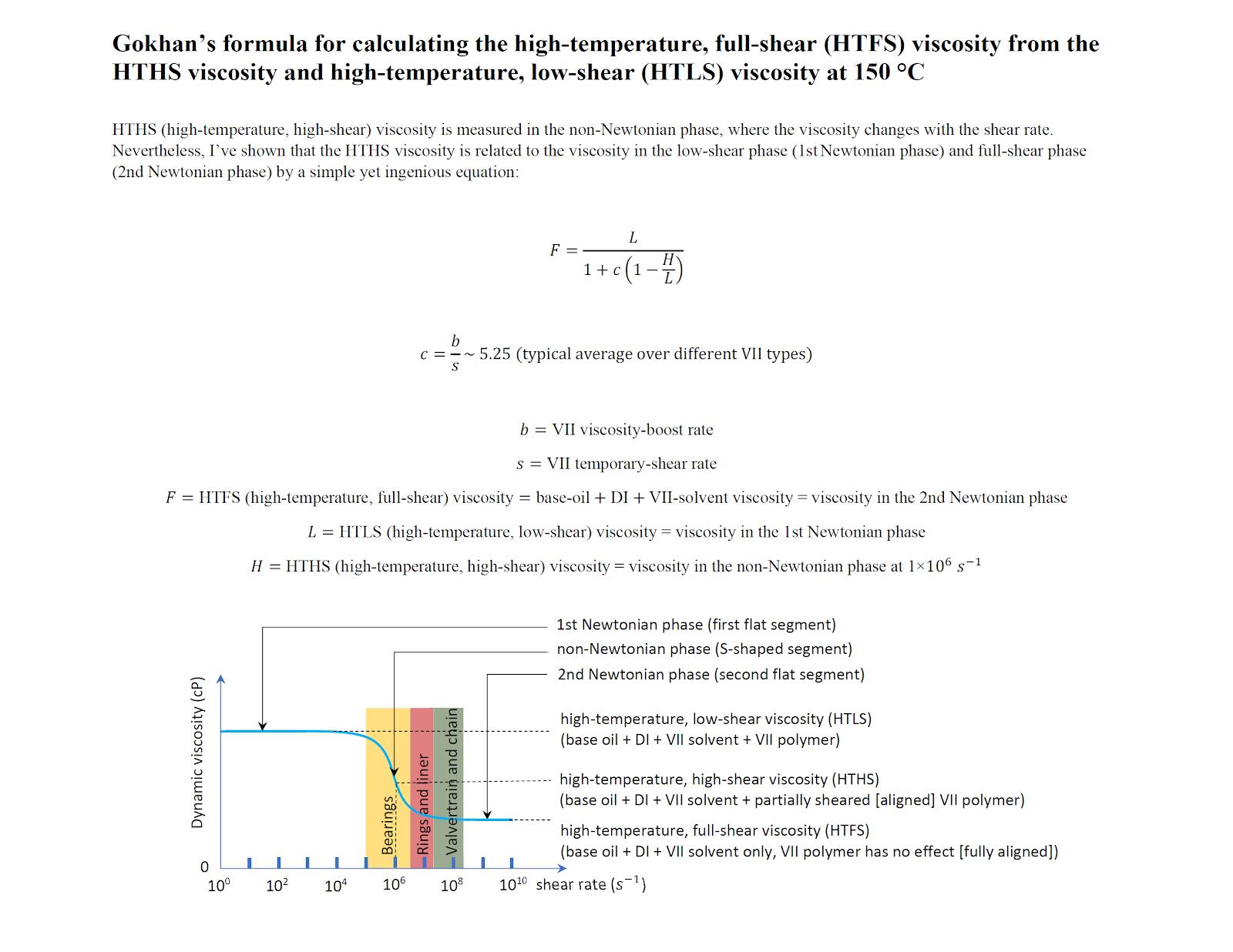 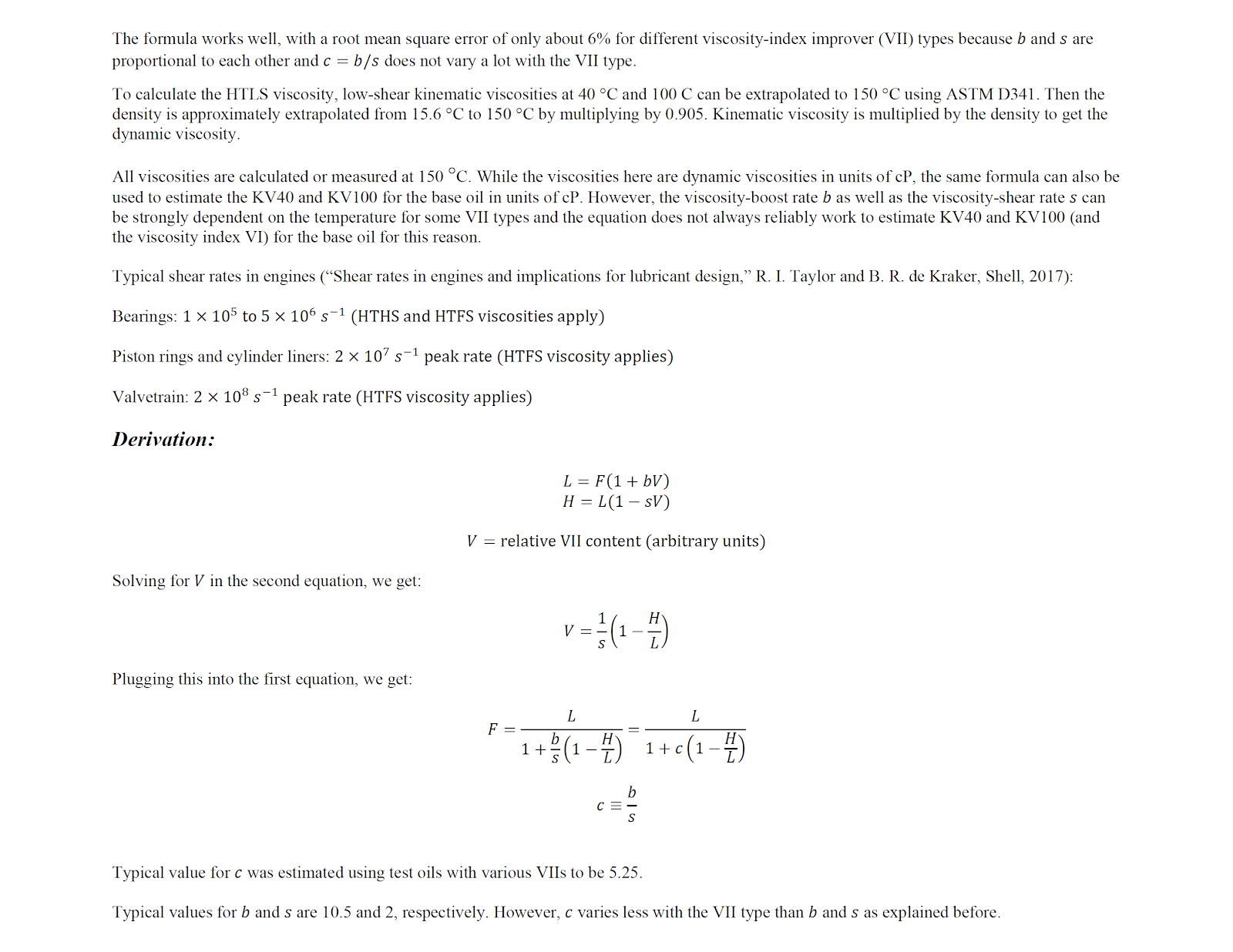 The average error in HTFS for different VII types is only 6%. However, I didn't study the error in ASTM D341 and density extrapolation, as the paper had the dynamic-viscosity values directly but not the density values. 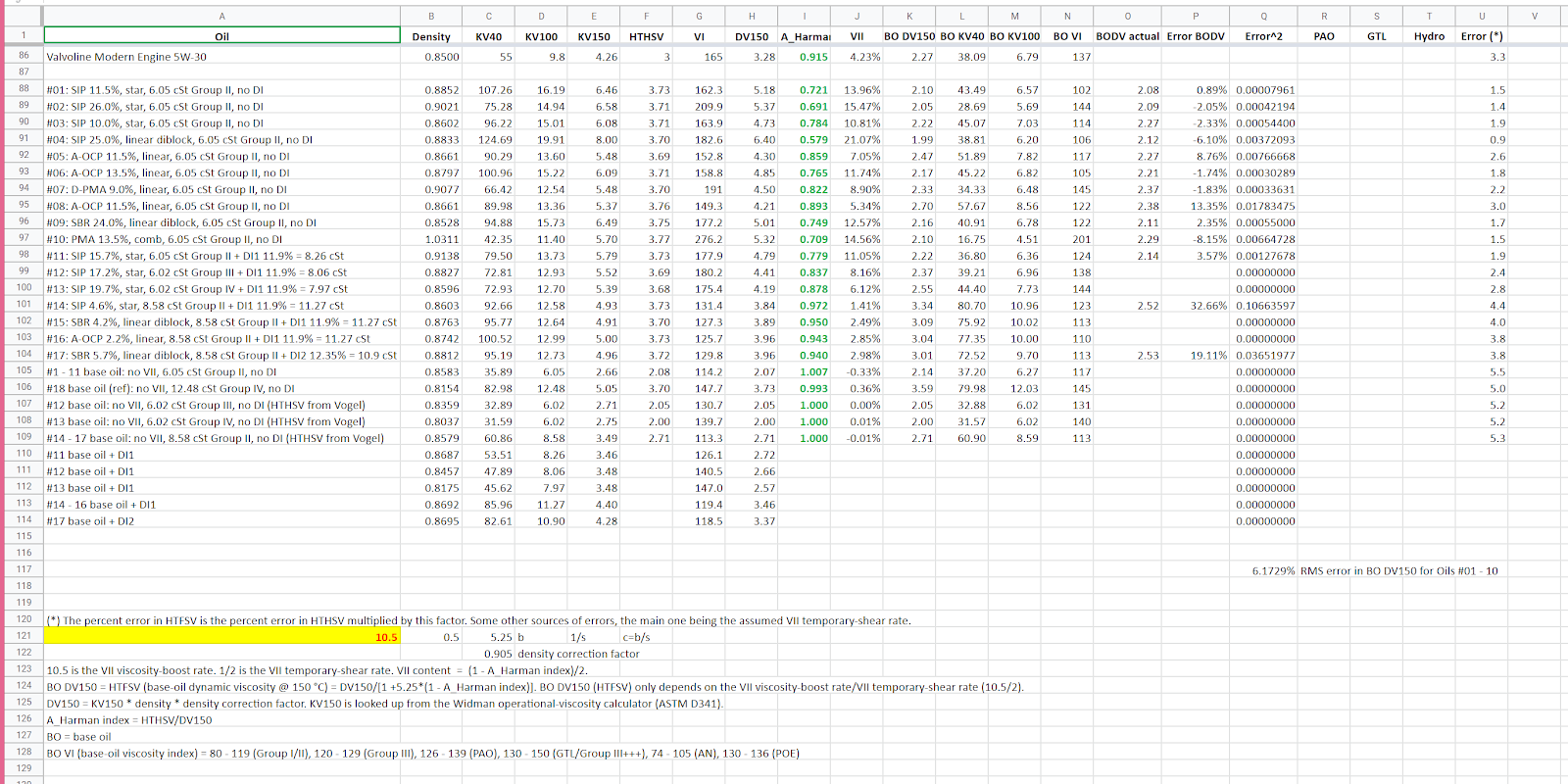 Thread starter
Here is the latest table with the calibration constant set to 10.5 after calibrating it against the test oils in the shear-thinning paper by Hugh Spikes et al. HTFS = BO DV150 = base oil + fully sheared DI + VII solvent viscosity @ 150 Â°C (full temporary shear of the oil, VII polymer has no effect on viscosity) Note that I didn't fill in the base-oil viscosity index (BO VI) values because they could be inaccurate. However, you can easily calculate them using the BO KV40 and BO KV100 in the Widman viscosity-index calculator. You can download the Excel sheet here: https://docs.google.com/spreadsheets/d/1oIYJP_5lgdt9l-_5n_ftKL5ScaaeY0MErFRothajZos/edit?usp=sharing 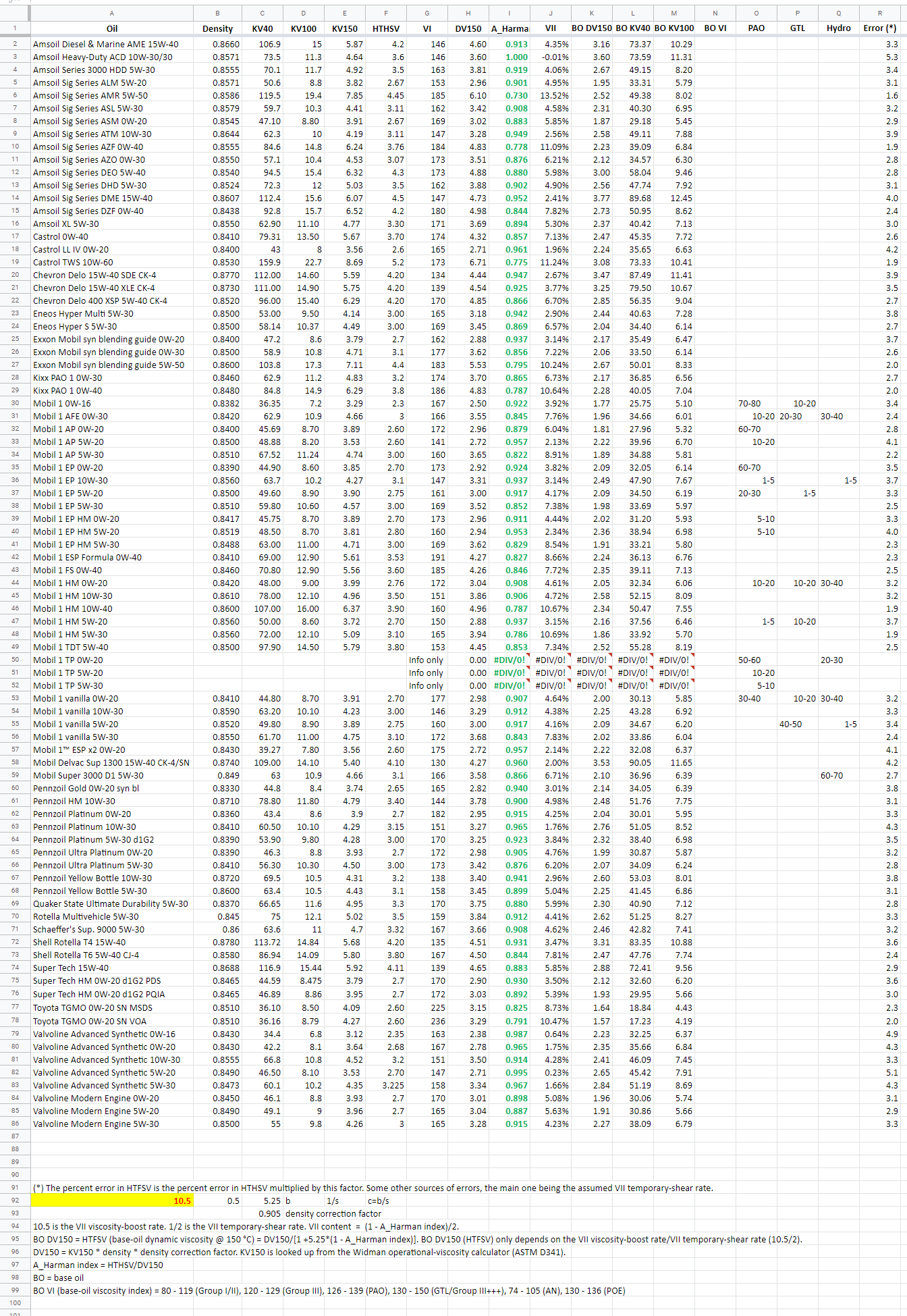 Thread starter
I will explain how to calculate the HTFS (base-oil viscosity at 150 Â°C) using an example. You need to know: density15.6 (density @ 15.6 Â°C) KV40 (kinematic viscosity at 40 Â°C) KV100 (kinematic viscosity at 100 Â°C) HTHS viscosity @ 150 Â°C You intend to calculate: HTFS viscosity @ 150 Â°C = (viscosity of the base oil and additives but without the VII boost @ 150 Â°C = viscosity under full shear at 150 Â°C) Example: Mobil 1 Extended Performance 0W-20 SN PLUS density15.6 = 0.839 g/mL KV40 = 44.90 cSt KV100 = 8.60 cSt HTHS = 2.70 cP (values taken from the product data sheet) Step 1: Go to the Widman operational kinematic-viscosity calculator that employs ASTM D341 and calculate KV150 from KV40 and KV100: https://www.widman.biz/English/Calculators/Operational.html KV150 = 3.85 cSt (calculated by the Widman ASTM D341 calculator) Step 2: Input the density15.6, KV150 and HTHS150 into the Excel sheet (or Google sheet) linked above. The sheet will calculate HTFS viscosity = BO DV150 (base-oil dynamic viscosity at 150 Â°C) HTFS = 2.09 cP (calculated by the Excel sheet) That's it! Don't forget that the HTFS value is an estimate. Note that the Excel sheet extrapolates the density from 15.6 Â°C to 150 Â° by multiplying by 0.905. The Excel sheet also calculates the base-oil (BO) KV40 and BO KV100, from which you can calculate the BO viscosity index (VI) using a VI calculator. However, these numbers are often not accurate and use them cautiously. Here is the Widman VI calculator: https://www.widman.biz/English/Calculators/calc-visc-index.html Now that you have HTFS = BO DV150, what do you do with it? Higher HTFS will help reduce the valvetrain, timing-chain, piston-ring, and cylinder-liner wear, as these parts experience ultrahigh shear rates, at which HTFS is the applicable viscosity. Higher HTFS along with higher HTHS may also help reduce the bearing wear, as bearings can experience somewhat higher shear rates than at which HTHS is measured (1,000,000 1/second) as well. On the downside for a given HTHS viscosity, higher HTFS viscosity will make the fuel economy worse, as expected from a thicker oil over a wider shear-rate range.
S

Gokhan, I've received a PM from a member asking how to calculate the HTHS of a mix...I use the Widman calculator, even though it's dynamic rather than kinematic...it's probably close enough for Government work. We've seen a couple of mixes that didn't quite marry up KV100 wise with the calculated figures. But in that PM conversation, I thought of your calculator, and how valuable it would be to predicting the viscometrics of a mix (I refuse to use the word blend). In theory, your calculator should be able to identify the base oil viscosities for the two oils, and the impact of the VMs on them...then mix the base oils, using well known relationships...then re-introduce the viscosity modifiers, and get back toe the actual KV100s and HTHS. Would be great if you could demonstrate it firstly with the blend guide...and I'll try to get the guy's proposed mix for you to work on.
G

Thread starter
Hi Shannow, My calculator needs these: density, KV150, and HTHS. In order to calculate a mix, say CATERHAM blend, I would do this: (1) Use my calculator to find the VII contents for the two oils (2) Calculate the weighted average of the VII contents (3) Calculate the weighted average of the density (4) Use the Widman mixing calculator to calculate the KV40 and KV100 of the mix https://www.widman.biz/English/Calculators/Mixtures.html (5) Use the Widman operational kinematic viscosity calculator to calculate the KV150 of the mix from the KV40 and KV100 of the mix https://www.widman.biz/English/Calculators/Operational.html (6) Use my calculator to adjust the HTHS manually until the VII content of the mix agrees with the weighted average VII content Here is an example: 50% Mobil 1 FS 0W-40 (HTHS = 3.6 cP) and 50% Mobil 1 EP 0W-20 (HTHS = 2.7 cP) density_mix = 0.8425 g/mL VII_mix = 5.77% KV40_mix = 56.15 cSt KV100_mix = 10.49 cSt KV150_mix = 4.61 cSt HTHSV_mix (calculator output) = 3.11 cP Note that this is an estimate only, as we don't know the exact VII types and exact values of the viscosity boost/shear (10.5/2 = 5.25 used in the calculator). So, it's not too far from the simple weighted average of the HTHS values, which is 3.15 cP. The example is in the bottom row: https://docs.google.com/spreadsheets/d/1gnOrQxsbymULx1s6_uBQi8zNHfJXg7lwwQpwzLSIWQI/edit?usp=sharing
G

Thread starter
It just occurred to me that calculating the VII content involves using the shear-rate constant s (~ 2.0) separately, which is prone to more error than using the boost/shear (b/s ~ 5.25) together, which is used for HTFS = BO DV150. That's because the variation of b/s is smaller than the individual variations of b and s with the VII type. So, instead of looking at the VII content, I would rather look at the HTFS = BO DV150, which is more accurate. In fact, that's the only thing my calculator really attempts to estimate. The VII content is more of an intermediate result in arbitrary units. For the example I gave, using the Widman mixing calculator, HTFS_mix = BO DV150_mix = 2.22 cP This gives HTHS_mix = 3.124 cP. It brings it even closer to the simple weighted average, which is 3.15 cP. Let me know what you get for your mix.
G

Hi All All credit to Gokhan for his work which is way above my pay grade. However I also like doodling with spreadsheets and have an interest in viscosity temperature calcs and VI etc. I would like raise a small point. Gokhan uses a factor of 0.905 to compute density 150. But I think this is a bit high. I have looked at two sources. Firstly Exxon Mobil data for their SpectraSyn andSpectraSyn Plus PAO oils. The spec sheets published give for example for SpectraSyn Plus 4 a figure of 6.44E-4. This seems to have been used by previous posters as the temp coeff of expansion. This I think is wrong. The 6.44E-4 is given with units of g/cmÂ³/Â°C whereas a temp coeff would only have units of per Â°C. The density correction factor as Exxon call it should be used as follows. Density 15 = 0.820 g/ cmÂ³ Density t = density15 + Dcf*(15.6-t) Density 150 = 0.820 - 0.0866 = 0.733 The simple factor is therefore 0.733/0.820 = 0.894 The other oils range from 0.893 to 0.898 the higher the density the higher the factor. Secondly ASTM table 54D gives what they call the "volume correction factor" for lubricating oil. There are spreadsheets and apps on line that use this data. This data is likely to reflect basic mineral oil but despite this the VCF figures for the above PAO oils are virtually identical. If you just want an average, 0.895 would seem to be a good figure. But if you want precision I have a simple formula for your spreadsheet: VCF = 0.126*density15 + 0.791 and therefore Density 150 = density15 * VCF Sorry to go on so much about a minor point but if you are going to do spreadsheets you might as well get it right.
G

Hi Sorry to disagree. As I said before alpha in the formula is a temp coefficient and has units of per Deg C. The parameter quoted in the Exxon data sheet has the units of density per Deg C, it is not Alpha! Also ASTM D1250 table 54D gives results in agreement. Alpha and the formula that you quote comes from the ASTM and alpha for a lube oil of density 0.820 from 54D is 0.6278/820 = 7.656E-4 per Deg C.
G

Hi Thank you for your reply. I'm glad we are on the same page. It would seem likely that the ASTM calculations are designed for base mineral oil stock. The question you raise is do the calculations apply to oils with viscosity modifiers ,etc. Good question! Anton-Parr publish on their web site the viscosity and density data for six oils - mostly multigrades probably ten to fifteen years old but that's the only data I can find. I am loading the data into a spreadsheet and see how real data compares with calculated figures.
B

I am now going to make a 2nd attempt to post a couple of charts. https://postimg.cc/DScHGrtJ This chart shows the density data for 6 oils. The best fits are linear trends and the chart shows extrapolation to 150 Deg C. The next chart shows the correction factors to go from density15 to density150. https://postimg.cc/LYGbSNZ7 The blue line shows factors from the data above. The red line is the factors computed from ASTM 54D. The formulae quoted are the trend line equations for their respective lines. They are somewhat different but then one is real data and the other is a model based on a standard parameter. I think this shows that commercial multigrades have factors no different to base oils. This might have the knock on effect that Harman indexes go above 1.0. I don't see this as being unacceptable but that's a topic for another time.
G

Thread starter
Hey Boxnuts, Since you're interested in this, I took some more look into it. The Hugh Spikes paper has data for 27 test oils on page 5. The ones in Table 6 are VII-free. They give the Vogel coefficients for dynamic viscosity. Hugh Spikes paper on VIIs and shear thinning We can also calculate kinematic viscosity from ASTM D341 (for example the Widman operational viscosity calculator). I calculated these for all these oils and put them in a spreadsheet. Spreadsheet with Vogel coefficients For the base oils and base oils + DI packages (Table 6), I get an average density correction factor (15.6 Â°C to 150 Â°C) of 0.903. For the oils containing VII (Tables 4 and 5), the results are all over the place and I don't trust them. Curiously, unlike the estimates you sent me, the density correction factor actually decreases with density, not increase. Finally this is the spreadsheet with the test oils. The purple cell gives the root-mean-square error in the base-oil viscosity at 150 Â°C (BO DV150, what I call high-temperature, full-shear viscosity or HTFS) against the test oils. The constant in the red cell is the calibration constant, which I adjusted it to be 10.5. The idea is to adjust the calibration constant and minimize the error (purple cell). The calibration constant is actually a property of the VII, but luckily the base-oil viscosity at 150 Â°C is not too sensitive to it, as the VII shear and boost rates are proportional to each other and there is a cancelation effect. BO DV150 (HTFS, base-oil viscosity at 150 Â°C) & VII sheet with Hugh Spikes test oils Last but not least, the ASTM D341 and the density correction factor are the two assumptions that go into this calculation. It's quite likely that ASTM D341 does not work that well when VII is involved. All this said, I will leave the density correction factor at 0.905. It's probably not worth worrying too much about it. ASTM D341 is likely more of a concern. Let me know if you discover something with the test oils. Perhaps you can even email the Hugh Spikes group and get the actual densities for the test oils. That would be great.
B

Hi I think all I've done is to replicate your calculations. Never used Vogel equations before so that's been very interesting. https://i.postimg.cc/90vJgHYk/DCC-15-150.png