A question for airline pilots

Thread starter
What all do you use to calculate your weight and balance before proceeding on the flight?
J

Each airline varies somewhat, but we use the passenger and bag count, fed through a database, to get speeds and performance data.
E

I started at the regionals doing it by-hand. We'd get a slip of paper from the flight attendants with a passenger count (usually divided by zone) and a baggage count slip, divided by cargo hold. We always kept a stack of Carbon copy worksheets in our bags. Pilots keep one copy and the other copy stayed at the departure station. Next was the same forms from the flight attendant and cargo agents, but it got run inside by station agents and manually entered into a computer that calculated it. Then the departure station ran the printed data back out to us. Then we got early smartphones where we entered the load data into a custom app. It got sent to a third party company with performance software who calculated it, then we received the data back on the phone app. Most larger airlines now take data from who boarded and where their assigned seats are and it sends automatically to load planners. The baggage agents also scan bags when they get loaded and that gets sent to load planners too. It's all calculated automatically and a full takeoff report gets sent right to the cockpit via the ACARS system. ACARS is basically an on-board text message/email system. The pilots print it on paper right in the cockpit. On old planes you then manually set flaps, takeoff speeds, takeoff pitch trim and takeoff power. Newer planes you can "accept" that takeoff data and the takeoff speeds and takeoff thrust will automatically be set in the displays and airplane systems. The takeoff report also tells you if you're overweight and how much tailwind you can accept on that runway. Sometimes you're overweight on certain runways but not others.

Why doesn't the pilots use full throttle on takeoff regardless of weight instead of measured power?
M

Reduce engine wear and improve fuel economy. They don't want to go full throttle unless it's really needed. Considering that the plane is designed and must be flown with enough extra power to withstand an engine failure during any phase of flight, there's never going to be a takeoff planned that requires full power from all engines.
Last edited: Jan 9, 2020
R

Some airports have noise abatement rules, and full throttle is to be avoided on certain runways and patterns. In bad weather I noticed the planes were higher as they passed over my house. Altitude is your friend. Air Force one has hotter engines and climbs very fast for safety. It was at least twice the altitude (I have no way to measure, if was obviously way up there) when it passed over my old house when compared to commercial flights.. It was still in a steep climb and rolling lots of smoke. Noise, fuel consumption and engine life is not a concern on that plane. Rod

Weight and balance is one process: every bag is scanned, and pit location recorded, every LD-2/3 container is weighed and its location on the airplane recorded, every passenger is accounted for, fuel load and distribution is measured and accounted for. Central load planning calculates weight and balance, then that information is uplinked (data link) into the FMC. Takeoff performance is another process: it considers, aircraft weight, CG, runway length available (intersection departures are common), runway elevation, slope, surface and condition, height of terrain and climb required after takeoff, air temperature, wind direction and speed, use of engine anti-ice, flap setting, and any deferred/inop items on the airplane, such as a thrust reverser, or a brake (with 8 brakes on a 767, you can go with one inoperative, though it's rare). The critical numbers: V1 - decision speed, Vr - rotation speed, and V2 - safety speed, are uplinked into the FMC, and displayed on the PFD, as well as set using "bugs" on the airspeed dial on a 757/767. Takeoff performance, particularly in a place like Eagle, CO, takes into account far more than just the airplane and the runway. The environmentals and the climb after takeoff, including engine-out climb, are all considered. In general, we use reduced thrust for engine life and reliability. The greatest stress on the engine is when it's making full power (like takeoff) and it's rotated in pitch (like takeoff). The combination of thrust load and gyroscopic load is the most the engine will see in the entire flight, so reducing both of those loads helps the engine avoid a catastrophic failure at rotation, which is when most failures occur. That's the reliability concern. The life concern has to do with thermal stress on the blades/casing/stators in the hot section. The last few percent of RPM and thrust put a LOT more heat into the hot section. Reducing thrust by 10% can reduce the thermal load by 20% or more and keep the engine in service for longer. We use full thrust when required: contaminated runway (snow/slush), in strong, gusty winds, when windshear is a possibility, or if it is required when the above analysis is completed. Often, the subsequent climb on one engine is the key factor that necessitates a full thrust takeoff.

That's why I asked, if one engine took a dump, your at rotate, and you weren't at full power, would you be able to successfully power up the other side before something bad happened, is what I was thinking.

Something like this that happened recently out of LAX. The right engine of the 777 had a compressor stall. The news of course exaggerates these things but it shows how a fully loaded plane can handle it. Believe me , that plane was loaded as I've been on those flights before. https://youtu.be/y-3aUfC1uNM

Originally Posted by Propflux01
That's why I asked, if one engine took a dump, your at rotate, and you weren't at full power, would you be able to successfully power up the other side before something bad happened, is what I was thinking.
There is no need. The takeoff performance was calculated at reduced thrust. That includes single engine climb, with the inclusion of all the relevant terrain gradients, and all the airplane performance parameters.

An example of weight and balance from today's flight (SAN-EWR). Sorry for the rotation. 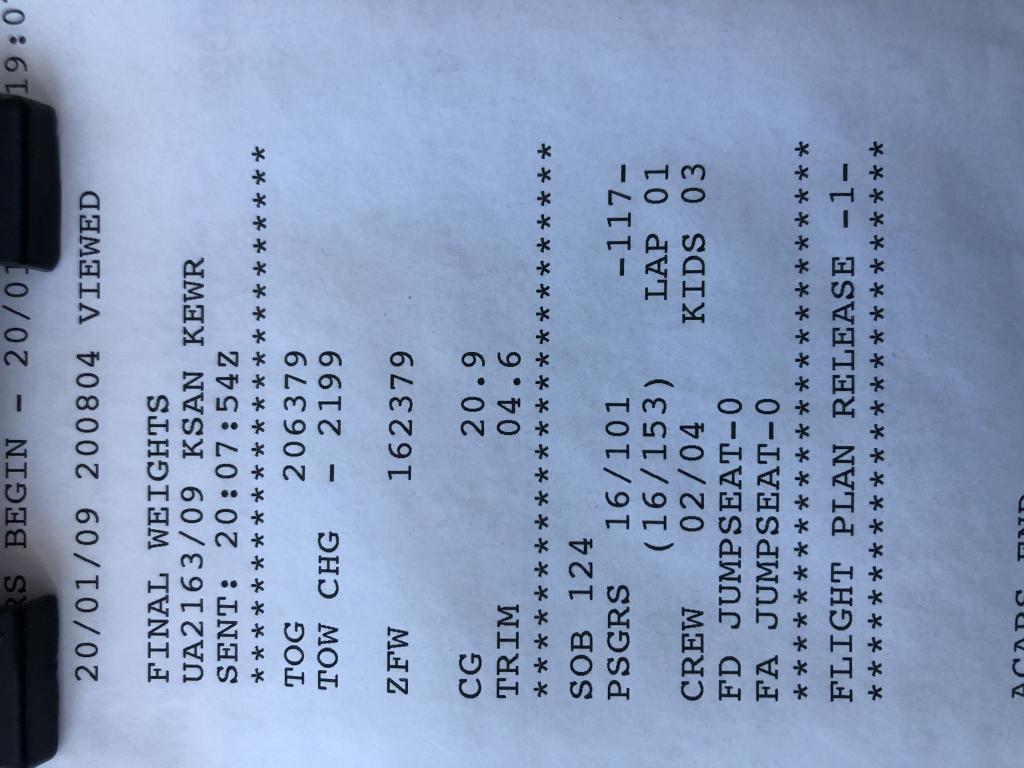 An example of takeoff performance calculations, again, for today's flight. 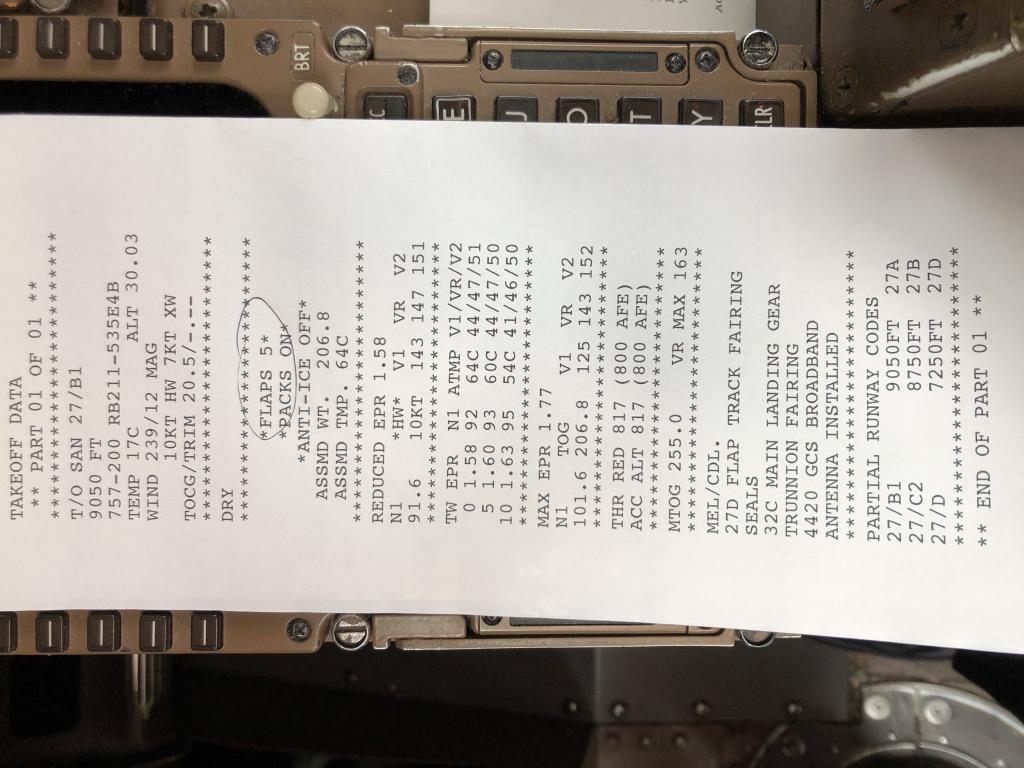 Again, sorry for the image rotation, and when I have more time, I can explain every block, but it shows all the details that go into performance. Including the MEL for the internet/satellite antenna housing added to our airplanes, which increases drag just a tiny bit, this reduces allowable weight by a few pounds and altitude performance by a few feet.
Last edited: Jan 9, 2020

@Astro14 How does the real-world performance match the calculated numbers? I can see baggage in the belly being calculated quite accurately, given that they weigh each bag, at check-in, but passenger weight and carry-on weight must still be estimated using the FAA standard weights? Given our ever-expanding waistlines in the western hemisphere that might be a bit over the FAA average combined with no-doubt increasingly heavy carry-on bags (due to airlines charging for checked bags as an extra), I can see the weight calculations being on the low side of what the airplane actually ends up weighing leading to slightly lower performance than calculated. I imagine the exact runway length used is hard to tell but the VSI would be a giveaway.
S

Originally Posted by Astro14
An example of weight and balance from today's flight (SAN-EWR). Sorry for the rotation.

You went right through my airspace today. ICT.J19.BUM

Originally Posted by spasm3
Is passenger weight estimated? An X value for each passenger based on the max passenger weight capacity?
Yes - passenger weight is estimated...if you were to look around at say, Wal-mart, you might think that the number is really low... I think it's 185/passenger for summer and 190/passenger for winter (the difference being clothing) but don't quote me on that. I don't actually know what value they use. Carry on bag weight is estimated, too. 40 lbs, I think, again, not my department, so I'm not certain. I've never seen airplane performance that would suggest the calculation is off. We are able to climb right in line with FMC predictions, so the weights are in line with reality. If they were off, and the FMC was calculating performance, especially cruise and max altitude, based on erroneous weights, we would see the airplane struggle to make the climb.

Originally Posted by zuluplus30
You went right through my airspace today. ICT.J19.BUM
And you guys cleared us direct BUM - thanks!

Thread starter
Originally Posted by Astro14
An example of weight and balance from today's flight (SAN-EWR). Sorry for the rotation.

And what was used to figure that? What data input? Accuracy?